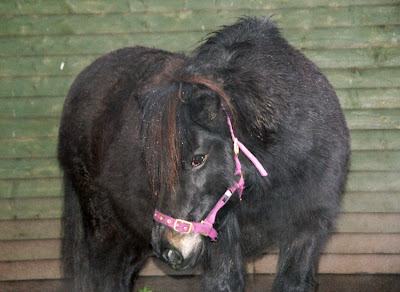 It's been almost eighteen months since I last saw Brandee and for a good long time her owners were able to catch her and handle her and let the farrier do her feet. However, during the last six months she has regressed and of course the more urgently she was needed, the more she resisted being caught. Horses are so good at sensing a strong intent but they don't always know what the intention is. Brandee will stand for a moment to let you work with her, clearly frightened, and then bursts out of the corner at speed - this explosive movement has been working for her in that it has put her owners of catching her and meant that they walked away. Since she doesn't kick or run through people, I chose to not take any notice of it but to simply and gently herd her back into the corner and begin again using the feather duster, and later a scarf, to touch her body.

You'd think after seven years Brandee but would be able to put the past behind her and trust her loving owners but something happened to this pony that was so bad that she was pushed over the brink and I doubt she will ever be a friendly and relaxed pony. Her owner made a great observation that during the summer she seems much calmer but in the winter when the weather is windy and horrible and the fields are much more open because they have dropped their leaves, she can't let her guard down even for a moment. Luckily the No Fear, No Force technique still works and by going back to the very basics I was able to catch her seven times in the space of an hour. I'm going to have another session with her soon and then be there on the next occasion that the farrier comes. After that we'll be able to get the owners back on to the job.
Posted by Sarah Weston at 3:05 PM