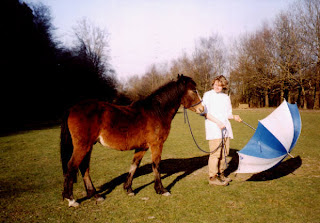 I meet Monty and the Princess of Norway up at Ian's (sounds like something out of the Tales of Nania). They were recording a programme for Norwegian T.V. Kelly asks me to help set up the next Monty Roberts tour (gulp!). (The tour takes place the following October and is a success.)

Attended the Feed and Nutrition and the Horse as an Athlete Course. It was good to be updated on the current thinking on matters such a laminitis and to really understand how to read a feed label. I love Ian's lecturing style.

Took delivery of the round pen from Positive Horsemanship. I have had it parked at PD's so that I can work with the six semi-feral New Forest ponies that she is letting me work with for the pratical element of my project - Soldier, Samson, Beatrice, Eclipse, Tiara and Trixie. I start to work with them for a little time each day and by day two Soldier and Trixie can't wait to go into the round pen!

I start to work for half a day a week at the Verderers' Office in order to find out more about the management of the Forest and to be generally helpful.

I also worked with an Irish Cob who has trouble picking her feet up and tries to kick anyone who lifts them up. I realise that she has a real problem balancing and isn't really aware of where her back feet are. We work with the L-shaped poles and over a little obstacle course and then work on de-senstizing her back legs with a false hand. Eventually she picks her back feet up easily and seems much happier.

I attend the Handling the Untouched Horse Course. I really enjoyed this course and all of it is really useful for my work with PD's untouched ponies. As this wasn’t one of my compulsory courses I was really able to relax and I learned so much about the body language to use and useful shortcuts which meant that the horses went from being untouched to handled and headcollared within an hour and a half of meeting them. I also learned a lot about safety as many of the horses we worked with were Shires and their back legs reach a long way if you put too much mental pressure on them. By the end of the course we had turned 6 totally untouched horses into calm friendly animals all with smart new headcollars on. One problem with being the holder of a camera is that no-one takes pictures of you but I am hoping for some video footage soon. (Sue Wilkinson if you ever read this – where is the video???! Xxx)

After a holiday of a week it was time to return to my Project Ponies and see what they had remembered from the last time I saw them. PD had also been out and got me two more - Trixie a very small yearling who was purchased from a friend, totally unhandled, very poor and covered underneath in dry cow poo! Also, Eclipse, a 4 year old black mare who just didn't fancy coming in off the forest, ever, thank-you. These last two gave me the chance to use some of the techniques I had learned on the course and I couldn't believe it when I was able to halter them and groom them all over within an hour of first herding them in from their respective paddocks. I do like ponies that know their own language and know that you are not a predator once you have touched them and moved away, rather than eating them on the spot. I made great use of my false arm and hand when touching them for the very first time (it's better than the real ones getting kicked). Soldier and Tiara are now both calm and friendly, allowing me to catch them in the field without food, to put headcollars on and to lead up to the top paddock. All three let me pick their feet up without a murmur. Samson is still nervy and has to be approached quite gently until he relaxes. I think he will take a little more time and I'm going to take some interesting toys with me next time I go in order to build up his confidence.

The first foal has been born on the Common. It's a huge colt foal. All the other herds came along to greet it and for a while they all went round the lanes in a group of about 30. It was like an Italian Christening when even the most far flung relatives come to see the baby.
Posted by Sarah Weston at 5:20 PM