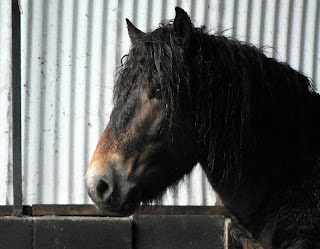 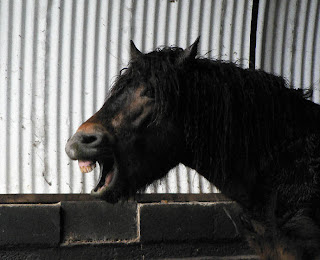 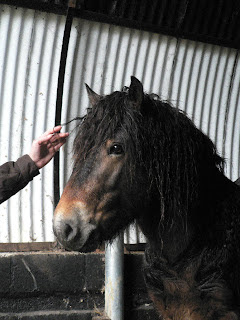 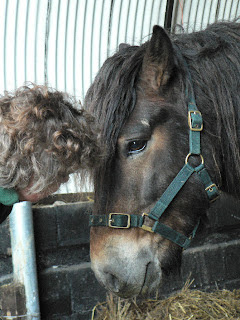 Piper is a seven year old Exmoor stallion from the Anchor herd. He has lived out on the moor all his life and had his own group of mares. Sadly, his owners decided that they had one stallion too many and that Piper would have to go. I don't want to go into the reasons why Piper was chosen - it doesn't really matter. It could have been any one of the stallions.
Piper was booked to go to Potters for meat on Friday, 11th November. To some people this may seem unforgiveable but the truth is that there are very few people who can take on a mature wild stallion given the cost in terms of time and money, and the facilities needed to keep him while he is entire. Who knows, even now, Piper might prefer to be dead than to have to give up his moor, his mares and his freedom from human contact.
Having been successful with 23 wild ponies at the Moorland Mousie Trust aged from 6 months to 2 years, I asked to be given the chance to work with Piper before he was put on the lorry. "If I'm not going to do any good," I said, "he can still go." He was deposited in a stable at the back of the Centre and during my lunch hour I would spend just ten minutes assessing his attitude to being approached. I was struck by how polite he was - he would go to the back of the stable, stand sideways on to me and indicate that he was "just over here, minding my own business" and would I kindly do the same so that there would be no confrontation. He was not aggressive but like Marlene Dietrich he preferred to be alone.
When I telephoned David asking him to bring the trailer down when he came to pick me up at the weekend he wasn't in the least bit surprised. The fact that half my money from the Moorland Mousie Trust course would be spent on an unwanted pony was just about typical really. I started work with Piper the day after I got back. He was parked in the barn which is really a Nissen hut with bedding in one end, food and water in the other and the gate open into the pony pound; a sort of room with en suite and conservatory. He seemed to settle very well but would speed away if I even so much as looked at him. "It's okay, I'm going away...." he would say. He really was extremely sensitive and I was very conscious that I would need to work very carefully if I was going to bring him round. Being faced with a blank canvas like this can be very daunting. It's important to make the first splash of paint before you decide to avoid it altogether.

Grandmother's Footsteps worked so well that the following day I was able to put my hand on his face and to stroke his forelock. As you can see from the photograph, every muscle was poised to go backwards at the first sign of any trouble but by the end of the short session he was far more relaxed. The day after that I could stroke him much more definitely and he allowed me to touch him between the ears and to rub his forehead. I was also able to touch his cheek and chin. By the end of week three he is letting me stroke him along his back, all over his face and part way down his neck - just a 6" gap between what I can touch from the front and what I can touch from the back! He chooses to stand near me when we are resting now and stands much closer while I do "room service". Although he is having to live alone, he receives regular visits by the Forest ponies and can touch them through the fence. The mare and foal next door often wave through the hedge.
Week four and I have bridged the gap. Piper now let's me stroke him all over his left hand side and loves being groomed with a body brush. I think there has been a distinct switch between him tolerating touch and now enjoying being touched. He softens his eye, lowers his head and relaxes. He likes his ears being touched (what a bonus that he isn't ear shy) and loves his mane being stroked. I'm really enjoying working with him now and am not so worried about whether I am doing the right thing, because it's obviously working! By the end of the week I have been able to touch and groom Piper along the right hand side of his face and neck and he is relaxed more and more as the week has gone by.
And here's the thing..... on 9th december, Piper's former owner contacted me to congratulate me on how far I have got so far. No-one wants their pony to go for meat if there is another realistic option. The truth is that Piper was never going to be easy and it's only because I have the luxury of working with horses all day that I can fit him into my life. We have still got such a long way to go.
Three days later and I have put a rope halter on Piper without a murmur. I haven't asked him any questions with it yet but he at least doesn't mind the feel of it around his head. I have also got as far as his tummy on the right hand side.
I have never allowed myself to have dreams. Partly because it's easier to cope with disappointment that way and partly because I don't want others to know if I have failed. I have a dream for Piper and I'm not going to keep it a secret - nor am I going to let it put pressure on him or me. I would like to ride him in next year's Moorland Mousie Trust sponsored ride on Exmoor; I would like him to go to one good show and I would like to complete a sponsored walk with him across a Long Distance bridlepath in aid of the Moorland Mousie Trust.
After 33 days (approximately 66 hours of gentle work), Piper let me put his first headcollar on. And....two days later he kicked me. It was my own fault as I just put a little too much pressure on him and he turned around and walloped me one. Since then I have put the headcollar on a number of times and he has been led around the barn. At New Year he is moving into a different barn where he will have access to more grass outside.

Nell and Blue are treating my place like a couple of university students. They just turn up when they feel like it, use the place as a hotel and never tidy up after themselves. They eat me out of house and home and never tell me what time they are coming home or who they are seeing when they are out. I had to draw a line with Nell today when she turned up with some stray friend that I have never met before. The girl appeared to be barefoot and pregnant - but then mind you, so is Nell. Pie on the other hand thinks he is independent - he looks as if he could do with a good wash and haircut but he's got some nice friends that he goes drinking with. (It's okay, just humour me!)

I attended the APBC Workshop at Witney (Association of Pet Behaviour Counsellors) which was entitled The Carrot and the Stick, an examination of different training methods for horses and the behavioural tools that they use. I was disappointed that the promised discussion and debate didn't really materialise and that different training methods weren't portrayed on a level playing field. In any event it helped me to clarify the role that clicker training can play in training. Clicker training is an excellent and positive tool to use during short training sessions and is a great way of teaching a horse to be imaginative and to offer behaviours. Nevertheless in my view it isn't a way of being with your horse all day every day since the horse expects attention throughout the sessions and needs to have a clear indication of when the session is over. In my view clicker training cannot avoid negative reinforcement altogether and this was accepted by the panellists - even the act of picking a horse's head up off the floor by lightly pulling on the headcollar amounts to negative reinforcement. I am very keen that there shouldn't be different "churches" within the horse training world and that our overriding aim should be to be as soft with the horse as we can possibly be (here I use soft as in attitude, not soft as in daft!). I will continue to use clicker training in circumstances where it seems the most appropriate way to go. Throughout my training I endeavour to use both positive and negative reinforcement and to avoid punishment.
Posted by Sarah Weston at 4:01 PM 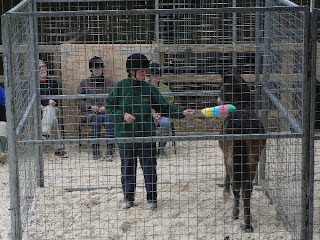 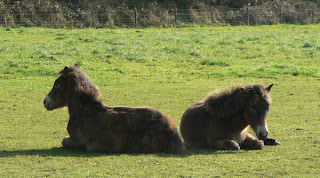 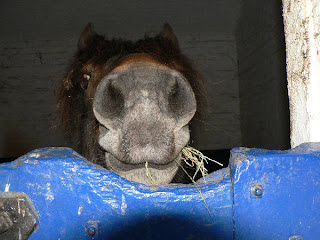 The Handling the Young Exmoor Pony course at the Exmoor Pony Centre was an absolute triumph. I have come home on a real high knowing that the 23 ponies that we handled have got an assured future. We worked with 19 foals, three yearlings and a two year old and by the end of the course they had all been touched, had there headcollars on, been led and had their feet picked up. On the last day all of them were caught in the big pen. We had 38 participants from all kinds of backgrounds: from conservation to probation, healing, hypnotherapy and reflexology, environmental health to tourism. All of us found it to be an immensley rewarding and emotional experience as these wild ponies began to accept and then enjoy human contact. 100's of people came to see what we were up to - most importantly journalists, pony breeders and staff from the National Park. We are already taking bookings for next year.
Pictures from the course are shown on the Exmoor Pony Centre website at http://www.exmoorponycentre.org.uk/ but here are a few more!

While I was there, the Johnny Kingdom programme "A Year On Exmoor" featured me and Billy Milton with david in the background. The general consensus was that I had come over well and David got an e-mail from RAF Lossiemouth asking him for a signed photo!