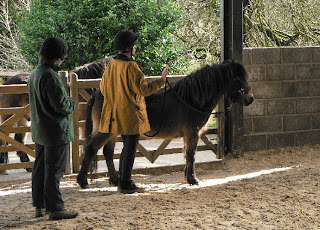 Well at least it isn't snowing! Although this is sort of a week off, I ran a clinic for the Moorland Mousie Trust today which seemed to go very well. With eight students and six identical ponies I thought I did well to remember everyone's names. It was good to see some people who came to the foal handling course and to see Barney and Treacle again. I was delighted to be able to work with my beloved Pippa who has just come back from two years off and a spell out on the moor. She looks amazing - fit and shiny.
Posted by Sarah Weston at 7:53 PM

The ideal day to meet Jonathan Gerelli, Head Agister with my feather duster and no, I haven't become his cleaner. I think I'd better explain....I've been talking to Jonathan about setting up some wild pony handling courses where students would work with unhandled ponies at no expense to the commoners who own them. All they would need to do is to provide the working area, a loo and a kettle and the students and I would do all the work. Unfortunately I have no availability in March or I could have worked with four two year-old colts that Jonathan is keeping entire in the hope that they will do well at the stallion passing. By the end of March they need to be handleable and allow people to inspect them (and their testicles!). I offered to work with them today and spent a fabulous afternoon with four absoutely glorious Foresters. I put headcollars on two of them and was able to touch the other two on both sides. I took the quietest one for a walk around the farmyard where we had a chat to the Charolais Bull. What's so fascinating is how different these colts are from each other - each representing the best but diverse aspects of the breed.
Piper is now turned out in the big field and follows a bucket into the round pen where I can catch him very easily. I've been walking him over the obstacles too. He thinks the blue carpet should be red.
Posted by Sarah Weston at 7:52 PM

Orca is due to go home next week and so I treated her to a Reiki session with Christine Wilkes. Now I don't quite know how this energy therapy works exactly but half way through this lovely mare started nickering to Christine and to completely relax. Christine thinks that she may have lost a foal at some time and that's a conclusion I reached some weeks ago. This horse is so kind to other horses and can be trusted not to kick and yet she used to be pretty violent with people. She would make a lovely nanny to young horses.
Posted by Sarah Weston at 7:52 PM 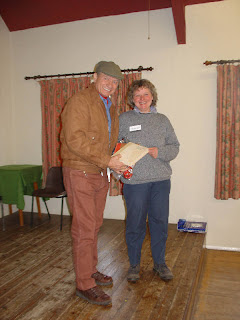 I attended the RA conference yesterday with all my colleagues and both Monty and Kelly. It's a great opportunity to share the things we have learnt over the last 12 months and to bombard Monty with questions. Yesterday he covered lunging, piaffe, airs above the ground, barefoot horses, disengaging the hindquarters and human to human communication. The key message to me is that Monty has never seen lunging done well and feels that it causes a whole raft of long-term physical problems in horses. We were shown a DVD of a top trainer explaining how lunging should be done and even though he used some body language and varied the work and did not hold the line tight, the horse could clearly be seen to tilt it's head to counter-balance the weight of the line and to dog-leg it's front and hind quarters. For more on this see p.106 of from My Hands to Yours by Monty. The problem for me is that most lunging is done pretty badly anyway so the physical effects are multiplied and the horse just goes into automatic pilot. Last Sunday I ran a groundwork and long-lining clinic for five owners and one of the horses over bent and went into robotic canter as soon as he felt a line against him - it was great to see his mind stimulated when we began to work him with the two lines and ask him to go over poles and around bollards.

Monty presented me with Moorland Mousie books and two Duallys for winning the prize for the most evaluation forms in 2006.

Elation this evening because I have been able to get the headcollar off the wild pony I have been working with. Although it was leather and quite safe, it was just starting to get too small for him. No-one had anticipated that this pony would just become more and more difficult to touch and his owner was really worried about him. This pony is quite a complicated little person and prone to go into panic mode at the slightest hint of intent. He is also very adept at getting people out of his body space by kicking out and running into them. Certainly not one for the faint hearted . (Don't try this at home) In the end I went for a rather unorthodox approach - Sheila and I held up a large black sheet of fabric weed suppression mat and blocked the pony into a corner of the stable. We waited until he grew quieter and more relaxed and then I took hold of the tag underneath his headcollar. Fortunately he didn't fight me and I was able to creep my hands up the side of his face to the buckle which had become stiff with mud. Very very carefully I undid the buckle and dropped the headcollar of his face. I then spent half an hour just rubbing his face and neck. It was such a relief for everyone concerned and I felt pleased that I hadn't had to resort to just grabbing at him or pushing up against hard panels. Hopefully he is going to come into the yard for a while to see if we can change his opinion of people.
In the meantime Piper is getting pretty easy to catch and is now allowing me to touch him all the way down his right hand side and today had a full body massage. I practically had to wake him up to give him a click and some pony nuts.
RE04 VZC Silver saloon
Posted by Sarah Weston at 7:48 PM

It's been a wild pony week - a New Forest colt, a section C colt and a four year old New Forest pony. I am rapidly coming to the conclusion that clicker training is the only option where owners don't have the facilities or appropriate fencing to contain a pony for whom the default position is flee! It's certainly working with Piper who now comes up to be caught. Providing clicker training is done in a disciplined way - only give a click and a reward where the pony does something desireable - then the ponies don't seem to become aggressive or nibbly. In fact it seems to make them decidedly cheerful. Im not into teaching ponies circus tricks but simple clicker training is great for teaching ponies to come up to people and to think before reacting.
It really is important that untouched ponies do become well handled early on while they are still malleable and open to learning. Pootling around for an age just teaches them to become more adept at avoiding being caught.
I hope no one is going to mind, but, despite the death of my Dad, I think I am happier now than I have ever been. I am loving every minute of my work and the sheer variety of horses and problems that I meet. I have the same attitude to horses as I have to food, if it's on my plate I will tackle it! It's wonderful not to be confined by the standards imposed by breed societies when deciding what constitutes a nice horse. I'd rather like my own t.v. programme ..... something on the lines of dog borstal for horses. Borstal is too strong a word though - must think of another one. Which reminds me - what is the collective term for RA's? A hush of horse whisperers?
Posted by Sarah Weston at 7:47 PM