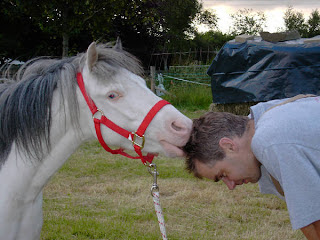 Completed my Join-Up videos for my Stage II course. Horrendous technical problems with digital video recorders not talking to the computer and the computer not accepting certain formats and a horse squashing the video camera and and and and... tapes running out and batteries running out and a 45 minute video of the inside of my pocket....
Attended Beaulieu Road Sales to take more video footage for my project.
Rode out with Agister Peter Rix on my own horse. Decided that Petra would be a liability on a Drift. She doesn't seem to look where she is going at all. Peter rides as the crow flies and he looks at the horizon and the horse looks at the ground.
Helped out at the Alfred's Tower Festival of Endurance - just opening and closing a gate all day. All the riders say thank-you so it is worth it.
Buy a New Forest colt off one of the Commoners and get some free snuff into bargain. End up coughing and spluttering all over the shop! In this way I manage to save Vigo going though the drifting process. His new owner takes him home after a couple of days.
Helped at the Three Rivers Endurance Ride which ran from Salisbury Racecourse. Vet writer for the day. I have to record the horses' pulse rates and whether they are fit to continue. The venue was at Salisbury Racecourse so it was great to have the opportunity to have a nose around. It was also a good opportunity to quiz a vet without having to pay for the answers.
Visited Martin Meaker who is a farrier on the Forest and his wife Diane (both Commoners). We discussed management of the New Forest ponies and their methods of breaking ponies in. I was then taken out in the carriage with Martin riding one horse and leading another behind. it felt like a scene from the Little House on the Prairie.
Took Pie to Folds Farm show where he came last in the Handsomest Gelding competition. What poor taste! I'd even given him a bath using warm water from our jacuzzi. It has been an exciting weekend for Pie. Since he has let himself into the girl's field I have realised that I should be able to lead him from Petra. This gives him a chance to get used to people being above him and moving about. Yesterday he went out for two hours with the girls. At stage in the enclosure, I let him off his rope and he trotted and galloped about after us quite happily. We had a sticky moment when a horse went the other way but as Petra is his girlfriend he stayed close.

I watched the pony drifts at Burley Rocks and learned a lot about what the agisters do. Hard work and very dangerous but the ponies have a tough time too. (More on that in my New Forest Project). Jonathan Gerelli, who has recently been appointed as the new head agister anticipates the ponies movements instinctively and tries to minimise adrenalin levels all round. A guy called Arnhel came to take photographs and stood on top of the posts inside the pen! Apart from possibly alarming the ponies, I was amazed that he dared do it - I have been pussyfooting around people taking the most discreet photos I could for the last six months.
My Join-Up videos have gone off to my course assessors this week - I am feeling very pessimistic as you can always spot faults after you have done something. Whatever will be will be and all that...

Helped out at Kelly's Demonstration at West Wilts Equestrian Centre. Jenny Tillyer came with me nursing her poor thumb which had been decapitated by a frantic pony. Kelly was on fine form as usual. Later went to see Richard Maxwell at Quob Equestrian Centre. Both demonstrations were enthralling but it was very funny to watch Richard being chased by Lynn Chapman when he asked her to catch him. He was worn out but she said she hadn't even been trying!
Revising like mad for my exams and putting the finishing touches to my Project aswell as putting together my homework together. This is the first time I have enjoyed revising.
Posted by Loisaba Wildlife Conservancy at 5:35 PM