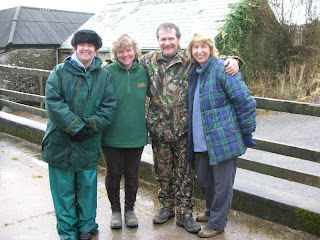 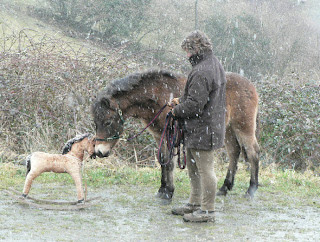 Had my first riding lesson of 2006 and Petra's first ever. She was such a good girl. I need to stop treating her like another one of the baby horses and present her with something more challenging! I have booked her in for the Rockbourne Ride in a few weeks. That'll certainly wake her up! There's always lots of horses there and we can have a go over the cross country jumps.
Went to the RA conference and discussed exciting things for the future. We had talks on the Port Lewis Impression Pad (good for looking for pressure areas under saddles); the Rocking S snaffle and the Tui Loading Bar.
From the 15th to 26th I went down to Exmoor again to work with some Exmoor ponies and to house-sit at West Hollowcombe.This house and cottages are situated in the highest village on Exmoor and the scenery is stunning. Apart from making a few beds for some holiday guests, we could do pretty much what we wanted. David worked with Bertie again and had a great success with him, eventually leading him onto a trailer to go to his new home on a conservation project on the Blackdown Hills. Bertie will never find people easy but he had really begun to trust David. I worked with an untouched colt called Billy and was filmed by the BBC on the first and last days. Billy was an absolute star and went from frightened baby to confident boy within just a few days. When the cameras came back he would lead around the yard and investigate some obstacles (a rocking horse and a bicycle) and then follow me over a tarpaulin. He also chewed the presenter's hat and washed his car! I also had the opportunity to work with Merrion again. I refreshed his groundwork and taught him to long rein and eventually got on his back for just a few minutes. While we were on the moor, Carol Barnett came to work with us for a couple of days and we had a very enjoyable walk with the two resident ponies although there seemed an awful lot of uphill. The plans for the Open Day of the Exmoor Pony Centre (owned by the Moorland Mousie Trust) are going well.
By contrast we saw some pretty appalling horsemanship while we were down there. The traditional method of halter-breaking these ponies involved tying them up to a post and in this case leaving them for hours. This pony had lost half its hair through a combination of stress, rain-scald and malnutrition. Val is negotiating to have this pony gifted to the Trust. If it doesn't happen very soon then the RSPCA will have to be called. It's a difficult line to tread because without the commoners co-operation there would be no Trust and without the fosterers and eventual purchasers there would be nowhere for these ponies to go other than for meat. In another livery yard I saw six horses that are never turned out and rarely ridden. There are two Exmoors, one cob, a thoroughbred and it's two year old son and another warmblood type all cooped up in airless dirty stables with hardly any room to move and filthy thin bedding with nothing to look at all day but the outside wall. The mare was extremely dull and her son was lethargic and had no muscle at all. I also had the misfortune to see their saddles - hard as rock, lumpy and far too narrow. They are all owned by a teenager who thinks she knows how to look after horses. I am rarely faced with such misery but I have been out to the odd client where I have had an ethical dilemma about whether to work with them or call the RSPCA straight away. The RSPCA's powers seem to be so limited and certainly don't cover mental welfare so I often feel that it is better to work with the owners to improve their understanding and change their attitude and then monitor the situation thereafter.

The day after got back from Exmoor I attended a First Aid for Horses Course at a fellow RA's yard. It was good to top up my knowledge and then top up my first aid kit. We spent the afternoon injecting apples with green food dye and I came home with a little green map in the furrows of my hand.
Posted by Loisaba Wildlife Conservancy at 3:39 PM