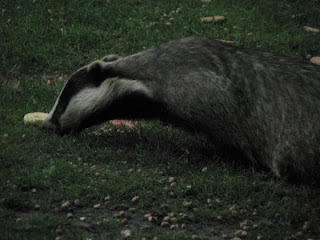 This is a special message for Linda Ray Brown - if you are reading this please get on with your coursework and stop surfing the net!
Good news - it looks like I will be doing regular work at the Margaret Green Foundation Trust, a charity set up for animals. They are hoping to re-home more horses in the future and need some more focused training for some of them to enable this to happen. Bad news, I came off one of the Fell ponies at speed and although I haven't broken anything, I am so sore I could cry. I am forced to catch up with admin work and daytime t.v. Fortunately David came to my rescue over the weekend and helped me to look after the ponies (and my landlord's flowers, fish and pheasants). The following week Auriol, Bea, Sheila and Yolanda all helped me to work the horses and keep the fields tidy. Auriol has even offered to take my crutches back to the hospital! I managed to ride a few times and to do lots of groundwork. At the end of the week the two Fell ponies and Boss all went home leaving me a rope-shy New Forest Pony to work with. For a change, he is not black!
During the week my talk on the Moorland Mousie Trust went down well and raised a little money for the charity itself.
I had a wonderful animal sitting job this week not only do I have to feed the cat and the ponies but I also have to provide cordon bleu food for the wild birds, foxes and badgers. Each evening David and I have sat extremely still in the summerhouse and watched the badgers and foxes.

A little rant about saddles. It's really quite simple, a decent horse deserves a decent saddle. All horses are decent therefore, they should all have a decent saddle right from the outset. I have had too many horses come in accompanied by terrible saddles that I am told will do for starting them ( because "it's not worth getting him a good saddle yet because he will change shape"). What message does it give a horse if the first time you sit on it with a saddle it is bloomin' uncomfortable if not painful and when they move it restricts their movement? I have seen horses with saddle damage simply from being long-lined in a badly fitting saddle. Muscle wastage can happen really quickly. When someone buys or gets given a horse, no matter how cheap and cheerful the horse is, they should still budget for a good saddle that fits properly. I am amazed by some of the saddles I see being used on horses - they are too narrow at the front, twisted and lumpy, having not been serviced or checked for years. Saddles should be checked for fit at least every 12 months and fully serviced (locally this costs me less than £50). The flock shouldn't just be topped up, it needs to be replaced. I don't care if the saddle has a posh label - if it is too narrow, it is too narrow. There are very few saddle makers or fitters that I feel able to recommend - most simply fit to the shape of the horse without allowing for the recover of badly wasted muscles and just exacerbate the problem. I really don't like synthetic saddles as they are so unsympathetic to the shape of the horse; I never see top riders using them. I am reserving judgement on treeless saddles as I am not convinced that they don't create pressure points on the horse at the front, back and where the stirrups straps cross the horse's back. I have found them to be too slippy in most cases for using on starting horses. Poorly fitting saddles are one of the major factors in creating behavioural problems in horses - a horse can't tell you that a saddle is nearly killing him, all he can do is fidget when he is tacked up, pull faces at you, move awkwardly when ridden and when he feels the need to shout, start to nap, buck or rear. Don't get me on to Dutch gags and martingales!!!
I have been to visit Kelly at Lambourn and it was good to catch up with all the exciting things that Intelligent Horsemanship is doing. The courses are as popular as ever- always oversubscribed. I had the privilege of riding out on Kelly's beloved Pie alongside her lovely new racehorse, Nessie. Kelly gave me the kick start I have been needing since I came off a couple of weeks ago. Despite having good reviews, I do suffer from self-doubt. That's one of the side-effects of having an open-mind; you always wonder if you could be doing something differently. Nevertheless, by the time that the rope-shy pony went home, I could ground tie him and throw a rope on the floor next to him without him even attempting to leave. With him I used the de-sensitization technique coupled with using a click and a reward. Next week is going to be strange as I have no ponies in at all as I wind down ready for Exmoor.
Out on the Forest, my three ponies are doing extremely well and haven't taken to chasing tourists or lane creeping. Blue is living with Cinders, a pony I fed through the winter as she was so thin. Nell has taken up with Oliver, a big blue roan gelding and little Pie, the honorary Welsh New Forest Pony is co-habiting with a little skewbald mare and her dun coloured foal. I see them almost every day as they tend to drink over at Janesmoor Pond now that the streams and small ponds are dry. They don't come back for food anymore.
Posted by Loisaba Wildlife Conservancy at 12:47 PM