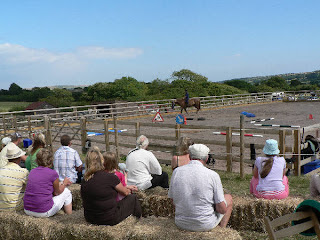 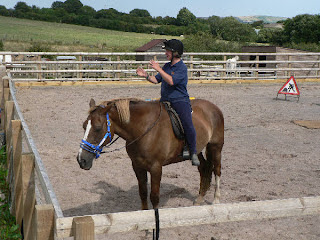 They say that pride comes before a fall, and I partially fell off a remedial pony the following day. Due to back pain and an unsympathetic saddle (synthetic) this lovely pony had been running away from the saddle and rearing on mounting and dismounting. Having had his back treated and fitted him with a comfortable leather saddle, done lots of groundwork and long-reining, I had got to the stage where I could put his saddle on while he was loose, mount him quietly and ride him in the round pen without incident. Unfortunately he was still very frightened of being dismounted and shot away as I was half way off. The rest of my descent was somewhat chaotic and I have a badly bruised and strained hand and tender bottom. This has really made up my mind for me that I can no longer ride remedial buckers, bolters or rearers especially if they have already put someone in hospital! I don't bounce as well as I used to (in fact I don't seem to bounce at all!); horses and ponies like this really need to go to people like Ian Vandenburgh. I shall stick to straightforward starters, groundwork, non-loaders, handling problems, clipping problems and untouched ponies, as well as continuing to do preparation work with remedial horses.
Posted by Loisaba Wildlife Conservancy at 12:55 PM