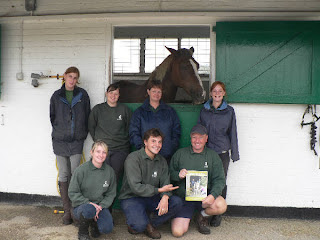 I finished a good run at the Margaret Green Foundation Trust on Thursday knowing that I had all but done myself out of a job. The staff there are all much more confident around the horses now especially the big ones like Tyson, Cassie, Barney and Cinnamon. Much of the groundwork has become instinctive to them and the horses are enjoying the consistency. There is also a greater acceptance that "playing" with the horses is really very worthwhile work. It was good to hear that Squirrel and Cinnamon are being worked regularly in preparation for them finding new homes. From now on I will only be going there to work with particularly difficult cases.

On Thursday night I went to a talk by Sally Fear, a superb photographer and supporter of the New Forest and the work of the Commoners. Her book and film "The New Forest Drift" provide a real insight into the workings of the Forest and the issues faced by the Commoners. She points out that 10% of the Commoners own 80% of the ponies on the Forest and without these commoning families the Forest just would not work. It is true that it is the same faces that turn up whenever there is hard work to do on the Forest; managing the drifting of the ponies; the running of the sales yard and manning various stands at public events. If the animals were taken off the Forest it would be an ecological disaster and the Forest would be overgrown and almost impenetrable within a few years. Sally's book is a must for anyone who loves the Forest or owns a Forest-bred New Forest pony.

The last week of October seems to be developing a theme. All three of the ponies that I met at the beginning of the week have been trained using natural horsemanship methods - including Intelligent Horsemanship and modified Parelli, most of which had been gleaned from books. Accordingly my work was simply to tighten up their groundwork with suggestions aimed at achieving better clarity and responsiveness. For example, it is so important to establish a neutral position at the withers before asking a horse to move his hindquarters away from you otherwise he may start to move as soon as you walk down his side. This can result in a horse that moves away from you when you want to mount. It must be excellent news for horses if this sort of horsemanship is becoming more widely used - although in each case the owners felt somewhat isolated within their own livery yards. One of these ponies was Flash, who used to be at the Margaret Green Foundation Trust, this delightful little pony is now so confident and came over to be caught. He had been frightened opf his rug but by the end of the session he was happily accepting it.
Posted by Loisaba Wildlife Conservancy at 2:33 PM