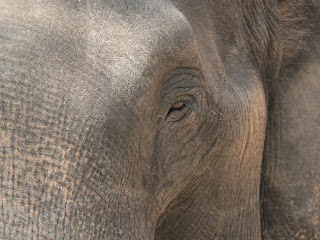 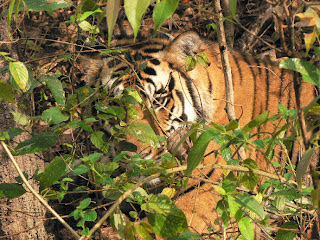 I don't think I will ever get blase about seeing tigers. We have seen seven altogether, four from the back of an elephant. We just walked alongside one for almost an hour. Breathtaking. The other highlight has been bathing Tara the elephant in the river. I would recommend the Krishna Jungle Resort at Mocha, Kanha to anyone. We all know that I could live on Indian food anyway but the hotel was relaxed and easy going and our naturalist, Ryan Wright and our driver, Rupesh Khan were such fun. We saw so many different types of birds, deer, bison and of course the tigers. I prefer Kanha to Bandhavgarh as the pace is much slower and you don't feel that the animals are compromised by the tourism.
It was the British that started to kill the tigers in earnest back in the days when military officers needed something to do at the weekends. Between 1875 and 1925 80,000 tigers were killed as trophies and this was followed by the death of millions of birds which were netted just so that the feathers from then exotic ones could be exported to the fashion houses of Paris and London. During the two world wars conservation was overlooked and in the years following independence, Nehru was too busy developing the infrastructure of the country to halt the decimation of the forests and natural habitat of India's wildlife. It was Indira Ghandhi who first outlawed the shooting of tigers in the 1970's. There are less than 4,000 in the world. The parks are gradually increasing the numbers and do their utmost to protect them from poachers. A dead tiger is worth 3 million rupees to the Chinese who use their bones in medicine.
A word about British Airways, the British Airports Authority and Serviceair - if we can get our friend Martin onto a train in Agra and onto an elephant - why couldn't they make sure that they didn't lose his wheelchair for two days in transit? I think their staff should spend a day each in a bog standard wheelchair so that they can understand why he prefers to be in his formula one, sports chariot up until he gets onto the aeroplane and as soon as he gets off it. It's not good enough.
Posted by Loisaba Wildlife Conservancy at 7:57 PM