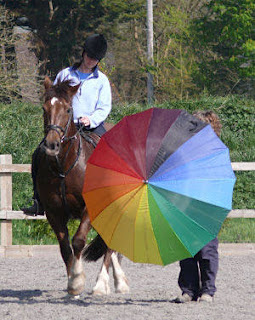 I'm pretty exhausted after my second 12 hour round trip to Somerset, this time for a clinic for four people and five horses. It's so weird how patterns emerge because I met another pony raised by a charity who has lost almost all respect for people and was completely de-sensitized to any form of body language. His loaner is going to have a tough job regaining control. I'm not normally into terms like respect, control and dominance. I like to work with horses as a "passive leader" as described by Mark Rashid rather than an out and out alpha mare. However, there are some times when it is necessary to take control by dominating in order to get respect so that you can ask the horse to listen and move on. I still would avoid hitting at all costs and I'm not comfortable with some of the trainers who thump horses in the face. I can usually achieve the same "impact" by shaking my gravel tin at them. It's the same with humans, the ones that have had the least parental guidance, lack of consistency and socialisation are the ones that end up having to have the toughest love to set them straight. At the other end of the scale yesterday there was a beautiful big bay mare with manners to die for - she was so light that the aim became to see just how subtle we could be.
Posted by Loisaba Wildlife Conservancy at 3:03 PM