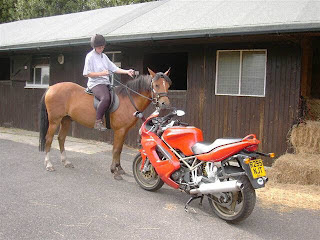 
Rode Horace out on the roads for the first time. He was absolutely brilliant. I also go and meet an Arabian horse that will be coming in for starting next Spring.

Attended BHS lecture by Peter Maddison-Greenwell of El Caballo de Espana. The horses were beautiful and the high school movements artistic but I felt that I'd like to turn them all out in a field. Oh dear.

Attended the RA conference in Oxfordshire and Sasha went off to her new loan home (from which she subsequently returned). In the meantime Patty has arranged to have Bobbin on loan. Musical ponies. Went to Olympia with friends.

Resigned from my job as a Legal Adviser to the Magistrates' Courts. I shall be a full time RA as from March next year. Go around grinning as if I have swallowed a coat hanger.

Took a friend's pony to Endells Veterinary Hospital with colic. He was described as a diagnostic conundrum. What a worry. Went to work with a yearling Highland pony with no name. I taught him to pick his feet up and to allow me to touch his hindquarters. Did some good groundwork and then got him to walk over an reflective board on the floor. Everyone was much happier with some consistent ground rules.

House sitting six hens, ten geese, two dogs, two ponies and a cat. Worked with a horse that spins round when led to the field and disappears back to the stable. Did lots of leading work incorporating the "smile in the line" and worked with pressure and release so that she knew when she had got it right. Before that it was like having a balloon on a string on a very windy day. (Later heard that this horse was now leading freely to and from the field).

Worked with an untouched New Forest pony that had evaded being touched for two months since being bought at Beaulieu Road Sales yard. He had perfected the snatch and run food technique! Was able to touch him all over without him running away.

Over Christmas hear that the colicky pony had recovered and was back home (a bit slimmer). The vets were never able to say what had caused it.