I'm working with two ponies at the moment who are pretty well bombproof. They are happy to just stand still and do nothing or, even better to be in the arms of their owners. However, that means that it can be very difficult to ask them to go forwards when leading and long reining if they simply decide they don't want to go. The figure of eight or quarter rope works very well with the former, providing a pressure to the hind quarters instead of activating the into-pressure response with a pull to the head, and it's also possible to use clicker training where appropriate for the horse and the owner.

Not so easy to get the pony to go forward on the long reins if there is nothing in terms of body language that will motivate them and they are completely unfazed by a flappy bag on a stick or even a rattle bottle. In some ways you want them to be like this so that sudden flappy things and sudden noises don't startle them when you ride them - a pony's disadvantages are also it's advantages and the other way round. It is all too easy to give the pony the opportunity to practice their 'no'. For this reason, I think it is better to go with dual controls at the start - have someone to lead the pony forwards and then start to direct from behind until it becomes second nature. Most importantly this makes sure that they understand what you are asking them to do and it practices their 'yeses' and their 'maybes'.

It does beg the question however of how do we ensure a work ethic from the outset, how do we set them up to succeed and do we actually need to leave a tiny bit of, let's say it, fear response in the equation. Some of the most dangerous horses I have met have been those that are absolutely unafraid of anything - if they decide to attack you, you have nothing left. 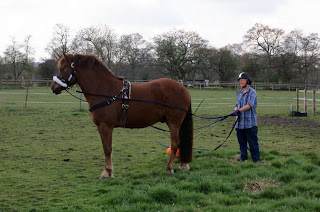 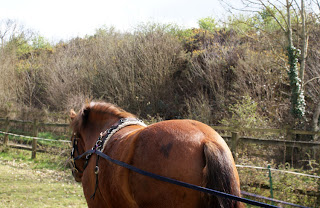 .....here goes. Rye was so funny. He just wouldn't move at all for the bags on the stick, but fortunately took notice of the wip-wop rope (which incidentally I flap on me not him). However, he was fascinated by the carrier bags and wanted to investigate them, attack them and play with them. Desensitisation with the carrier bags is usually the 'advanced class' and whilst I take care to use them incrementally, I would normally have the horse on a lead rein. No need with Rye. He was happy to have them all over his body and all down his legs especially when I rubbed him with them. New Forest pony for a police horse anyone? 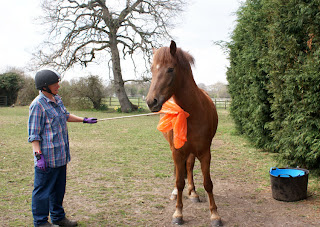 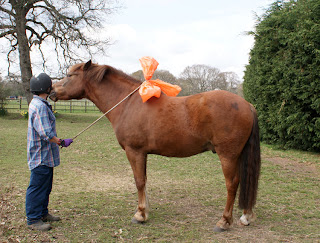