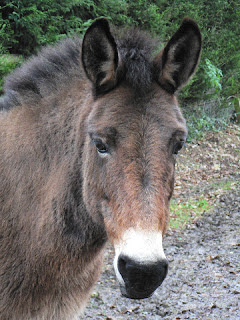 Two lovely horses have come in at the start of the month. A bay New Forest pony for starting and a big coloured mare for some general remedial work. It looks as if I will be kept busy all over Christmas. Little Pie decided to come home yesterday so he is topping up his calories and having a wormer before he goes out again. Petra, with her go-faster stripe clip is enjoying having her own herd home again.

The New Forest pony was stud bred and hasn't encountered pigs before. On day two I couldn't get a second of his attention because there were three pigs outside the field. I took him over to look at them and after trying to dive away, he settled down to just staring at them. After a while he became fascinated and we followed them up and down the fenceline to watch them snuffling away in the leaves. Good timing I think because when I left the field at night, three pigs had moved in and were gaily going over my trotting poles. D-pony just carried on grazing.
I have to confess to being an addict of programmes such as House of Tiny Tearaways, Supernanny and Dog Borstal.Although they can be formulaic they all show how being consistent and persistent definitely works along with being logical, using positive and negative reinforcement and some definite leadership. Last night Tanya was explaining how a three year old child could not fill an emotional hole in his mother's life and that the child just could not cope with those expectations or the disappointment she felt when he couldn't do it. Developmentally he could only be what he was - a child of three. I wonder how many of us get frustrated when a horse cannot be what we want it to be; they can only be what they are - a horse. Many of us seek solace in our horses when life isn't going right ........

I was delighted to receive a box of chocolates today as a thank-you from a client who's just been awarded her 50 hours rosette for hacking out. She is really enjoying her riding now and the pony has a lovely new saddle made by Clare Barnett. These rosettes which are presented by the Wessex Classical Riding group are a great incentive for people to get on and get out with their horses.

On my way to a client at Blissford, I spotted the hinny that normally lives at the Fighting Cocks in Godshill. She really is the most beautiful mule I have ever seen.
Posted by Loisaba Wildlife Conservancy at 4:02 PM