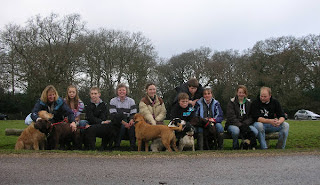 After one week, the two newcomers are progressing well. Both have seen the physiotherapist and are due to have their teeth done on Tuesday. The starter had his first long-reining session today having been introduced to rugs, pigs and dogs last week. He is really enjoying his walks out on the Forest - as a stud bred pony he hasn't really had the chance to explore before. The coloured remedial horse is enjoying her walks too and loves jumping over the streams and logs that we meet. Today I rode her for the first time and she was fine. On the way out of the fields tonight I thought I would just back Nell. I put a headcollar and lead rein on her and leant over her a couple of times and then got on. She stood there as if nothing had happened before turning and chewing my shoe lace. We then pottered off for a few strides before I got off and gave her a big kiss. Not bad for a "wild" pony.
Approaching Christmas we have had a lot of visitors - mainly to see Piper it has to be said. Our daily session are now observed by two or three people at a time and he is becoming oblivious to their presence. These get togethers are an excellent excuse for lunch at the Royal Oak.
At long last I have got round to having Petra microchipped. I can't imagine the anguish of your horse going missing or the police finding it but not being able to prove that it's yours. She was very suspicious of the microchip reader and not impressed with being bar coded! She has never met a brush that goes bib-ip before.
Just before Christmas I received notification that my offer of free assistance to the New Forest Pony Publicity group has been rejected. They didn't give any reasons.
Horses may be unpredictable but life isn't, every high I have is usually followed by an equal and opposite low. Having put Piper's headcollar on for the first time on Saturday, I managed to get myself kicked the following Monday when I made a small mistake with him. He turned away from me and when he felt me against his leg he kicked out. Not his fault but ow, it hurts (a lot). My long-reining sessions with the other two horses were a bit limpy.
Neal from the IHDG has been staying and helping me with the horses this week. It's great to have some company and to be able to long-rein in tandem through the inclosure. He's also good at laying the fire and making supper when my poor injured leg forces me to rest. I love having people up at the yard helping with the horses and hopefully picking up some of the techniques on the way. I work on the basis that I don't pay and I don't charge! Over the Christmas holidays Sophie and Stephanie both came up to lend a hand and David went out riding on Petra.
On the Thursday after Christmas we had a long dog walk with dogs Fudge, Connie, Hannah, Lucy, Molly, Buster, Echo and Sasha.
Posted by Loisaba Wildlife Conservancy at 4:07 PM