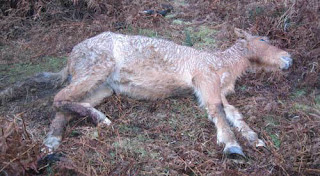 The animal accident figures for 2006 on the New Forest have been published. Last year 69 ponies were killed and 44 injured across the Forest. The vast majority of animals are killed by local motorists and 36 were not reported. Two recent accidents have highlighted the callousness of some people: a donkey and her jack foal were killed together at Brook and a chestnut mare was badly injured on 9th January and left to wander the Forest for three days before she could be found and destroyed. I travel along the B3078 every day in order to go to the horses and am regularly overtaken by people exceeding the 40mph speed limit. Many of them are commuters. From today I shall publish their registration numbers on this site.
Posted by Loisaba Wildlife Conservancy at 7:40 PM