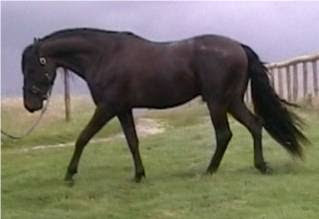 It's pannage season again and there are pigs of all shapes and sizes loose on the Forest. Some horses are horror stricken when they meet them and this isn't helped when the pigs have been fed from horseback and are very eager to come up to them. Today we took Paris in hand to see some pigs in a paddock so that we could introduce her in a controlled environment. By asking her to take six steps forward and then backing her up three steps very gently so that she could lower her adrenalin, we were able to get her to stand within two feet of four big pigs and several very vocal and mobile little ones. On the way back we met some more on the Common - these were particularly snuffly but she coped with them. Good groundwork is the absolute key to managing these situations - the horse is much happier if has a leader in all sense of the word.In fact good groundwork turned out to be the key theme for the rest of the week too. Whether dealing with a 2 year old that has already been busy racing as a trotter and needs to go back to basics, a mare that barges through the vet or a home-bred Andulusian stallion that likes to see whether he can turn people on by nipping them, clear leadership is critical and simply moving them around and meaning it is often all it takes. No need to hit, to shout or to run away -a clear intent and self belief is sufficient. Now, I wonder what Petra would make of an Andulusian stallion? When Noggin wasn't trying to seduce us with his lips, he was wonderfully responsive and quick to learn. When we turned him out in the field again he gave us a demonstration of his athleticism - breathtaking.

I must applaud Emma, who owns this stallion - she is really laid back with him and he lives out for the most part, at the top of Okeford Hill where the views are stunning and has daily contact with other horses including mares.
Posted by Loisaba Wildlife Conservancy at 8:30 PM