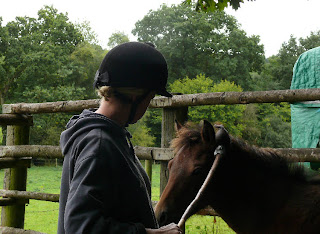 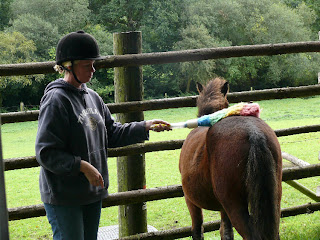 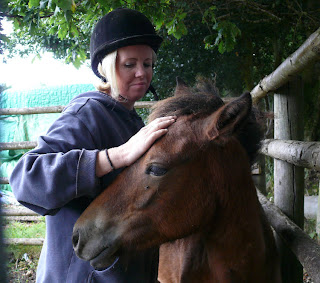 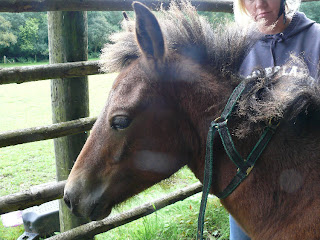 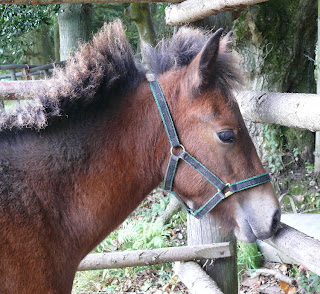 This series of photographs were taken between 11 a.m. and 1 p.m. today. Heavenly-Briar is a Forest bred, Forest run unweaned 6 month old foal by Farrier's Rambler that belongs to Rod at Godshill. Until today she has never been touched in any way by a human and had never allowed herself to be touched or approached anyone. Rod described her as pretty wild. With her mother tucked into the pen next door we were able to touch her with a hand on a stick within one minute of entering the pen by using the touch and move away (advance and retreat) method. In no time at all we were able to use the feather duster and then our own hands. We worked with her one at a time with no force and no pressure. Amanda, my student for the day, had never put her hands on a wild pony ever before and yet she did most of the work. Briar was pretty relaxed throughout the session and in no hurry to leave when the gate was opened again. I am pleased to say that Amanda liked her so much that she has decided to buy her.

It would be easy to say that this foal was exceptional but time and time again the same technique has worked for me and I find it works much better with a foal that has never been handled at all than one that has been restrained in order to put a headcollar on in the past. It's the touching that counts - not the headcollar.

E-mail received: Evening,
Just to let you know that we had to move to our winter fields today. I led out Honey (formerly Briar), through the yard, where someone was unloading a skip from a lorry, up the road, along the side of all the other horses in the field including 5 mad galloping TB ex racers. Did not bat an eyelid !!! So very, very proud of her. She one of those "am I bovvered, do I look bovvered ?" types. Love her to bits. AS 7.11.08
Posted by Loisaba Wildlife Conservancy at 10:40 PM