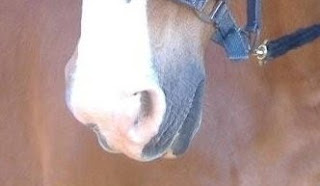 I have been invited to a meeting about transporting horses safely where the emphasis will be on a safe trailer, a safe horse and a safe handler of both the horse and the vehicle. It reminded me that in Germany it is illegal to trim a horse's whiskers. Scientific research showed that horses that had had the trimming of whiskers is a contributory factor to facial trauma whilst travelling. Just like cats, the horse needs his whiskers in order to have full sensory perception and it is thought that they not only feel using their whiskers but that they can detect sound too. The cells in the whiskers share the same attributes to those seen in the brain.
(McGreevy, Paul Equine Behaviour page 50)
It also encouraged me to compare and contrast various loading techniques described in various books. None of the horsemanship books which are based on a psychological approach suggest the use of a whip and all encourage the use of systematic desensitisation and the use of pressure and release. It is only the more traditional books that suggest the use of a whip on more reluctant horses but even they stress that the handler must not lose their temper. The underlying message, whichever method someone chooses to use, must be to practise and practise lots before expecting a horse to go anywhere. The risk of an accident must be much less if the horse has learnt how to load quietly and calmly so that they are not already wound up before they go anywhere.
We had fun on Saturday with a horse that has had a loading problem for a good while. As usual we started off with the panels in place as these usually encourage horses to engage in the process and bit by bit they are taken away once the horse is flowing on and off the trailer much more happily. This horse, whose quite a substantial size, backed up to the panels and began to scratch his feathers with absolute glee and then he gave the panels a jolly good push just for good measure. Fortunately they are sturdy enough to withstand this! Afterwards we were able to get back down to work and in time he was going on and off easily.
I had this e-mail from his owners the day after: We went up this morning to work again with him. I put his dually on and did a bit of groundwork in the field while K prepared the trailer, then took him up to the ramp. He stuck just once or twice on the foot of ramp, but I was consistant and he stepped forward nicely and walked in. Initially he wanted to back straight out again, but I was firm and asked him to stand. He settled and I fed him some haylage and stood talking calmly to him for a while. I then decided to back him out slowly and made him pause a moment once on the ramp. Then asked him again to come in and he walked calmly in. He was such a good boy. On the third time he had decided he didn't want to go in. I managed to get him to move several steps from side to side but he wouldnt go on the ramp. So K and I swopped over and I helped by standing behind him and using my body language and a bit of a kiss noise to put pressure on him. After a minute he moved in with K. We decided to finish on that note as he had gone in 4 times in a short space of time nice and calmly. So we gave him some more haylage to eat in the trailer so the last time he stayed in there a bit longer and finished the haylage.
Bear in mind, this is a horse that has taken two hours to load previously and sometimes refused to load at all.
Posted by Loisaba Wildlife Conservancy at 8:56 PM