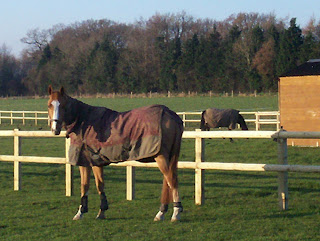 My first week at work has been fabulous. I went to see two 'old' faces last weekend and both are doing really well. This week started off with two new faces - a lovely New Forest cross and then a Dutch Warmblood (above) who is extremely tall. He has decided that he won't be caught and all the body language in the world won't persuade him. It's been six years since he was caught in the field and his previous owners got round it by just letting him in to his stable. Given that he has more stamina than I have ever had, the only option was to make somewhere smaller for him to go so that I could ask him to fully engage with me. Interestingly he immediately parked himself in there and with just a little bit of mirroring and some careful body language we were there. Once caught I used clicker training again to reward him for allowing the headcollar to be touched and for being clipped on. He looked down his rather regal Dutch nose and said "For me?! How very kind..." and cheered up immensely. We practiced the whole scenario a number of times and each time he took himself into the corralled area and allowed himself to be caught much more easily. In time I hope that the owner will be able to make the corralled area bigger until she doesn't need it and that she will be able to turn him out without a headcollar at all.

E-mail received 2.3.09 Thought I'd give you a quick update on the tall ginger horse!
He's been amazing - since the day I spoke to you last, he hasn't so much as wandered away from me - I just walk straight up to him!! I'm thrilled!

I went for a short meeting with 'Jim the Fire' (Animal Rescue Officer of Hampshire Fire and Rescue Service) and ended up staying for well over an hour as he showed me more footage of horse rescues over the last few months and some horror stories from You Tube.

My book is with a publisher at the moment and we are praying that it will be accepted. I am convinced that there is a horse God and that the book will eventually be published. We need it to be out before the next 'batch' of foals are ready to be handled. Look down the page to 21st December and 10th December to see how well some of last year's foals are doing.
Posted by Loisaba Wildlife Conservancy at 1:52 PM