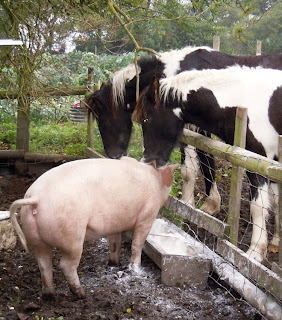 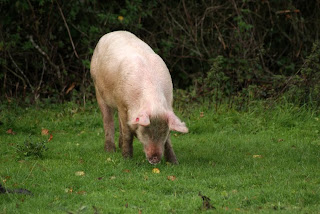 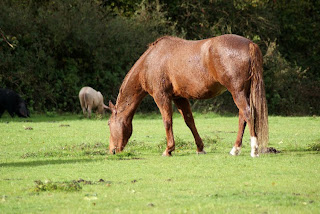 Pictures of Tabitha's ponies, Magic and Merlyn, licking pigs over the fence was a sharp reminder that I have some work to do with Theoden. Despite living on the edge of the Forest, he seems to be terrified of pigs and our last session with the farrier was a bit exciting as he was completely distracted by five pigs frolicking in the field next door. I resolved to do something about it when I got back from Dartmoor but there was some Godly intervention on the Saturday as we were about to leave. David and I had gone to collect the panels from the field amidst the blackest clouds. As it began to pour down, we took refuge in the trailer, and we watched Theoden standing like a statue next to Jack and Petra as two large pigs, one pink, one black invaded their field. As a massive hail storm developed, the two pigs fled into the field shelter to save their softer skin and this seemed to convince Theoden that they were not fierce predators at all. Later he followed them down the field and then started to graze fairly close by. Job done!!
Posted by Loisaba Wildlife Conservancy at 10:35 PM