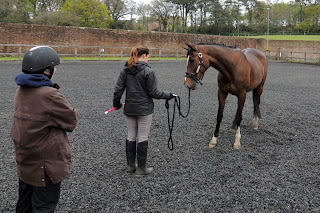 At the end of the week which has been decimated by the weather, it was great to go and work with ex-racehorse Roo. Despite some really careful training by her present and interim owner, Roo has a solid phobia about poles and is also worried about things approaching her (or more particularly people with things) on her right hand side. You might wonder what she experienced during her racing days, where she went from flat racing to hurdling, for this to happen. There is nothing we can do about the past but we can help her as much as possible now. We worked through the 'touch and move away' technique with the feather duster until she was happily accepting it on both sides.

Later we worked through the L-shaped poles before asking her to stop over them. By working the direction of the main fence we were able to avoid her really rushing and by the end of the session she was stepping over the pole much more calmly. We also introduced clickered rewards for stopping in front of the pole (where she was so worried she would only hold the food in her mouth), and after the pole where she relaxed enough to chew and swallow it. The most hopeful thing is that she clonked the pole with her back feet a couple of times and whereas she would have absolutely fled before, she was thinking enough to work out that nothing bad had happened and able to stop within a couple of strides. Might seem odd to be asking a horse to stop before and after a 'jump' but this has to be better than her flying it as she would have done during hurdling.
Posted by Loisaba Wildlife Conservancy at 8:02 PM