On Monday evening I went to help out at and watch Monty's demonstration at Crofton Equestrian Centre. This was the last of a series of ten dates this autumn and by all accounts it has been his best tour yet - not bad when you consider he is 77 years old and he has done 40 tours in this country. 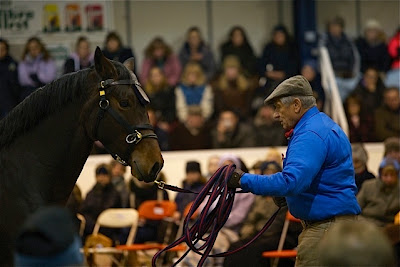 He worked with a fabulous starter called Dylan. This horse's history was horrendous. He was found almost starved to death in a field just as the farmer who owned him was trying to shove his apparently dead body into a large hole in the ground. Fortunately someone noticed that he was still alive. He is now fit and well and pretty solid! IHRA Bridget Hughes was the first to get on board and she described him afterwards as being very comfortable. 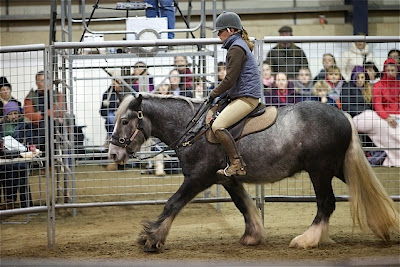 The next horse had been difficult to mount for a number of years. He had had a badly fitting saddle and there were white marks on his high withers which were probably attributable to that. Monty showed how by using long reins a horse can be trained not only to stand by the mounting block but to take himself to the mounting block and 'park'.

After the break there was a fabulous coloured horses called Jiggy. She was one of the spookiest horses I have seen and Monty wasn't convinced he would do any good. She ended her session walking around on the huge tarpaulin with her head at Monty's shoulder even without a head-collar. I'd love to work with her as she reminds me so much of the semi-feral ponies I meet.

Finally Monty worked with a non-loader called Mischief. Mischief normally over four hours to load and a range of methods good and bad have been tried with her. Needless to say she was walking on and off the trailer within minutes. 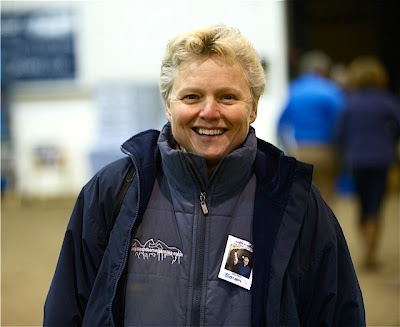 It was lovely to see so many friends and clients at the demo, and those that I call 'frients' because I have grown so fond of them.

These photos are all credited to Jo Monck Minstrels on the Hill Photography
Posted by Loisaba Wildlife Conservancy at 6:25 PM