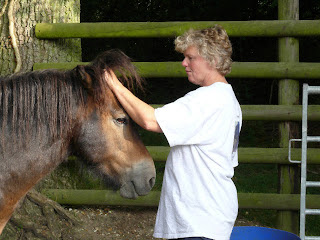 I have recently been immersed in lots of scientific papers (a big thank you to Damory Veterinary Clinic who let me camp out on their library floor and wade through the last twenty years of the Equine Veterinary Journal). There's some fascinating and puzzling stuff about. Why would someone want to test out the effects of water restriction on 6 pregnant mares? Still, the results help me to form a view as to whether water deprivation has any role in the training of horses - in my view it does not. There's lots of interesting stuff on the risk factors which make it more likely that a horse will develop stereotypies such as crib-biting, weaving, wind-sucking, box walking and so on. Leaving a horse for long periods in a stable where it cannot touch other horses, has too little forage and too much concentrate seems to be the major factor - linked to the fact that stabled horses without ad-lib feed are very likely to have gastric ulcers. The need to touch and be mutually groomed by other horses seems to be an important part of the life of the feral horse and certainly the horses that I have living in herds or living out on the Forest seem to be much more secure about being left on their own from time to time than those that are separated from other horses most of the time (and you would think would get used to it) or those that lost out on early socialisation. Sadly those are the horses that seem to then ruin their chances of staying with other horses by being too possessive, aggressive or dominant when they are put in with other horses.

Piper is a funny onion, he doesn't seem to mind whether he has company or not. He's very easy going with other horses and no trouble to them at all. For an ex-stallion he is very casual about mares and he loves being with foals. I do sometimes wonder if he thinks they are all a different species to him in any event and whether I should get him another Exmoor pony to play with. Little Kanuthi seems to be the most self-assured of the lot - he is surrounded by loving Auntie's and Uncles and living an idyllic life. I brought him with Blue and Nell to avoid the drifts and took the opportunity to put his first headcollar on. He couldn't have cared less. Petra Perkins used to be aggressive with other horses and took over Alpha leadership some years ago when Rosie was unsound - it was a case of The Queen is Dead; Long Live the Queen and poor Rosie always took second place from then on. Petra doesn't seem to care that horses come and go all the time. She is pleased to see familiar faces, catch up on the news and then to wave them goodbye when they go.
Posted by Loisaba Wildlife Conservancy at 9:33 PM