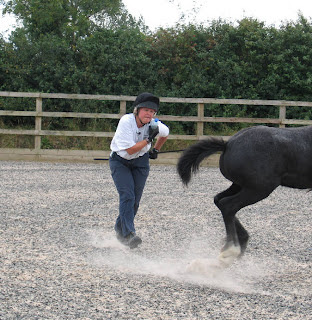 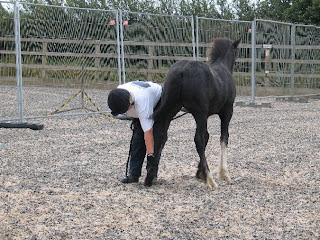 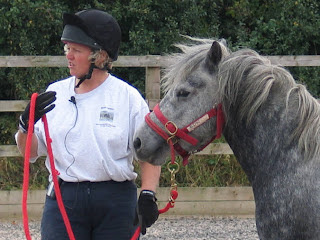 I really do implore any horse lover to send money to Horseworld in Bristol. It's a really professional charity with clear goals and strategies and staff dedicated to doing the best for the horses. There is real hope for all suitable horses to be re-homed and over 300 have done so. The Open Day on 2nd September was tremendous fun. I arrived having been to see two Exmoor ponies "on the way" at Honiton and was soon presented with a huge four month old colt to work with. Prince arrived at the charity in utero when his mother was rescued in a very sick state - she was terrifically thin and permanently disfigured by a badly healed fracture in her front leg. The foal is stunning and should be very athletic. He has had very little handling although he has been at the Visitor Centre where he has learned not to have any fear of (or dare I say it respect for) humans. It was like having a lively balloon on a string for the first ten minutes. He would launch himself skywards with his front feet, just missing my ears and then his back feet. He looked most surprised when I wouldn't let go and hurtled about to my left and right. What with the windy weather and me being out of breath and trying to describe what I was doing over the mic, the audience must have thought that they were being treated to a bizarre dirty phone call. In due course he was standing still, hardly deflated, but calm enough for me to touch him all over and to pick up his feet for the first time. See, there are some advantages to the humanised horse.

The next pony, an Eriskay called Lilly (below), had mislaid her manners at her last home but quickly recovered them as soon as she found that I was worthy of her attention. She deafened everybody by neighing into my microphone at regular intervals. And finally, William, a big gallant horse aged 10 who'd been bought for the Riding for the Disabled. He would have been utterly unsuitable because he is frightened of everything and everybody. He was terrified of the feather duster on his left hand side although he would let me touch him and rub him with it on his right hand side - usually a clear indication that a horse has been beaten on his left hand side by a right handed person. I wasn't prepared to push or rush this horse just for an audience and they seemed well satisfied when instead I demonstrated how to apply fly cream to the ears (let the horse "lick" it off with his ear instead of shoving cold cream down his earhole); why you shouldn't use scented sun tan lotion on an already sun burnt nose (it will turn your horse into a giraffe because it blimmin' hurts) and how to de-sensitize you horse to fly spray using reverse psychology. By the end William decided he trusted me enough to let me touch him and rub him on his left hand side with the feather duster and was led out of the arena following an umbrella.
Posted by Loisaba Wildlife Conservancy at 9:38 PM