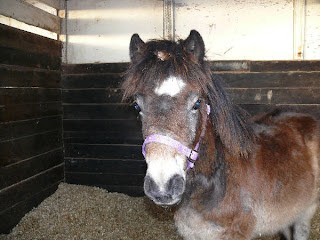 I've been back to Horsham today to put a headcollar on Bryn. It took a bit of doing as he was so worried about having his head restricted again - the headcollar that his breeder put on was so tight that it left marks that haven't disappeared even four weeks after we took it off. Today we showed him that headcollars don't necessarily hurt and that if you touch them they might even give you a click and a treat! By the end of the session we had put it on and taken it off seven times and he was getting used to the whole idea. I also removed the sticky bud from his hair.

On Saturday an eight year old New Forest pony arrived for starting. He was bred by Pat Dunning who owned all my project ponies and so he's a confident and friendly boy. It's be interesting to see how easily he takes to being ridden - it will be nice to work with mature bones but will he be set in his ways?

One of my latest customers is a professional showjumper. She and I have some very different ideology but many things in common too. It will be funny to see how she reacts to my mud coated, long haired, whiskered horses that live out full time. In the meantime I have been making friends with her shiny, well groomed, largely stable-kept expensive horses. It's no good saying to her that she shouldn't clip her clipper phobic horse when he has a job to do that makes him hot. Hopefully we will be good for each other and widen each other's knowledge of our seperate worlds - after all we are both in the horse business.
Posted by Loisaba Wildlife Conservancy at 8:58 PM