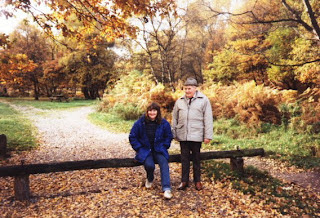 Another week of hard but rewarding work. X and W are hacking out alone at walk and trot and yesterday X had her first canter since she was re-started. Given that they have been ridden in gale force winds, a deluge of rain and five minutes after the hunt have been through, they have been remarkably good. My visits have all involved young horses - Jane is now leading Conker out for short walks and thinking about getting him a new companion. Another pony needed to be re-introduced to the long reins having had a nasty fright with them. In these days of electric fences it is essential to run through a series of exercises to reassure them that the long reins are not made of the same stuff. My final customer was a Thoroughbred x Appaloosa. In his rain mac he looked like an ordinary bay Throughbred colt but it was taken off to reveal the most spectacular markings and what a fabulous character this little horse was.

The week has been overshadowed by the death of my Grandpa. Fortunately I was able to see him on Friday and he gave me a lovely kiss and told me he loved me. He was one of those essentially good people who has never done anything to excess - except work. Fortunately he enjoyed a very long retirement after he and my Nan gave up their shop. Everyone had a great deal of respect for him and it is especially hard for my Nan who has been married to him for over 60 years and isn't very well herself and for my Mum who has never lived more than a few miles away from them. My Grandpa was the sort of person who would buy the opposite pudding to you on the menu so that if you didn't like yours he could give you his.
Posted by Loisaba Wildlife Conservancy at 7:55 AM