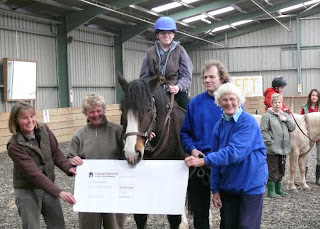 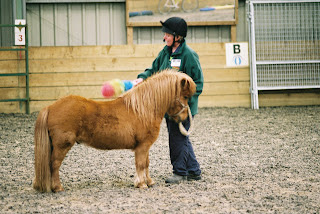 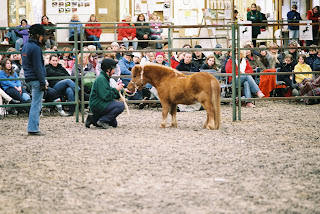 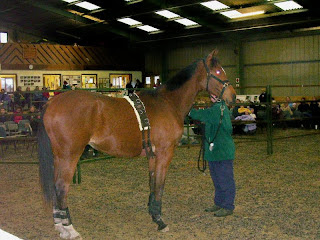 By all accounts my demo went very well and we have raised £1,000 for the RDA Wilton Group. At the start I felt like a bridegroom waiting to see whether the bride would turn up, but all the horses that I had been promised turned up on time and were the stars of the show. No horse, no demo and also no helpers, no demo. I couldn't believe it when we had the whole place set up and ready to go within one hour and all looking really tidy. Dismantling was equally slick and we left the place looking like we had never been there.

The first pony, Tigga, got as far as being half clipped by the end of the first half - we used touch and move away technique and clicker training for him. Bella and Lily were confidentally being touched and having their feet picked up and then followed umbrella's and bicycles around the arena before walking over the carpet and tarpaulin. Lily is actually a Narcissus as she kept gazing at herself in the mirror.

Ori, who seems at least 20 hands high and isn't yet two, came in on her toes and I did wonder whether she would be able to calm down enough to be long reined. With a bit of groundwork and some de-sensitization to the long reins I was able to get her going quite nicely and looking a lot more relaxed by the end.

Finn, the biting horse didn't live up to his reputation and after I shook the rattle bottle at him once, I couldn't persuade him to try to bite me again no matter how provocative I was.

Sunny the horse that won't load to go home, wouldn't load and we were able to give a good demo of pressure and release and use of the panels. He kept throwing his head up into the air, usually a clear sign that he has previously hit his head, and seemed very worried about the partition once he was in.

Reviews specifically from the demo:

Well done yesterday, you did a great job.
Hannah

I am glad you are saying 'successful'! It really was a brilliant demo and you were amazing. I really hope that you get a lot of feedback and work from it. I had some feedback from Fi last night. She sent a text saying 'fantastic, really glad I came'. Then she phoned me and said that she wanted us all to know what an absolute pleasure it was to watch us all working and she wanted to shout to everybody to take notice of what we were doing and how we can change their horses lives! Anyway well done to you.
Sheila

Well must say... i'm kinda beaming today... we finished up yesterday's clip... without sedalin, vet sedation or a twitch in sight! (something we've never been able to do!) But by the very end after our last break i could just turn the clippers straight on and put them on him! Amazing results... and i did notice near the end when i turned the clippers on you could see him go to move them suddenly as if a light came on he'd freeze and stand rock solid still... i can only describe as if waiting for his click & treat! We got in done without a battle of wills just by using the clicker.
Jodie (owner of Bella and Tigga)

Great demo! It all worked very well and I was proud to be one of the team. You have no need to be nervous about doing such events, just be yourself and people love you.
Derry

I came and watched you yesterday and thought you were very good and very brave, well done.
Zoe

I really enjoyed it. Sarah makes it all look so easy!
Evelyn (non-loading horse)

I was there 2, well done sarah it was very interesting 2 watch,(great demo's)
Charlotte

Had a great time and thought Sarah was amazing! I for one am extremely proud to have been a part of the display and thoroughly enjoyed it, and going by Lily's behaviour she did too! right little show off bless :-)
Tracey (nervous pony)

Was an enjoyable demo-did you get to finish clipping the 'mini'?I came away with a few tips and will be taking a container of vit C Pills in my picket with my sometimes nibbly horse (ok to rattle not to take!)
Colin

fantastic Sarah thanks so much, ori was such a good girl and settled nicely in a decent time. brill demo, enjoyed watching all the ponioes... but tigga is SOOOOO cute!! and ori looked.... soooo big
Toni (owner of Ori, long reining horse)

Have you recovered from Saturday - you must have been exhausted once the adrenalin wore off? I thought it was an excellent demo and what a great selection of horses/ponies. Although I was impressed by the sheer size and beauty of that 2 year old thoroughbred I think I liked the chestnut Shetland best and the Welsh pony was totally fascinated with the mirror - it was very funny!!
Frances

You will also be pleased to know that Sunny has been practising loading last week with no issues, but the test was a Wimboune RC Gymkhana on Saturday. Unfortunately I wasn't there but C took him and on the way home he loaded for her within 5 minutes..... much to the shock of many others there!!! (he has a reputation!!!)