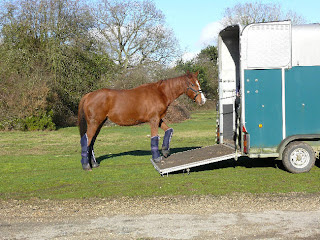 It is the loading season again and I'm being asked to go out to all sorts of horses and ponies that have gone on strike about travelling. Regrettably, I am usually called as a last resort and when all else has failed or so close to the event that there isn't really time for the owner to get lots of practice. Even more sadly, the safety of horses and people is compromised by the state or design of the vehicle they are loading into or the place where they are being loaded or even the style of driving once loaded. Recently I was contacted by a lady who seemed astonished when I said that I won't load horses off a hard surface even though she'd told me that her own horse had a propensity to rear. One horse trainer that I am aware of, did attempt to load a horse on a concrete surface. The horse reared and went over backwards and was killed - simple as that. This owner cancelled her session with me because she can load the horse in a school, she said, and if she needed to load him off a hard surface she would just hit him harder.

I also went out to a pony that wouldn't load into a fairly old trailer - with hindsight perhaps I should have realised that it might have old fashioned webbing straps at the back. In any event, we were loading without a partition because the trailer was too narrow with it in so the straps were useless and more than that, fastened together they would have been dangerous. When the pony was loading well but showing an inclination to run backwards I called a halt to the session and advised the owner that she would need a full length back bar before it was safe to put up the ramp. Seemingly she is not satisfied with my advice and is continuing to load the pony without a back bar in place with a child holding on to the pony in a pressure halter. Having seen the catastrophic injury last year to a man who was holding on to a ramp as a pony came out backwards in a hurry, I stand by my decision. Loading is dangerous enough without deliberately taking risks. My only consolation is that someone who is so quick to complain when I can't finish the job would be even quicker to sue if I had injured her pony or her daughter. This same pony went through the floor of a trailer with a previous owner so it's not going to help him if he has another trailer accident.

By coincidence I have picked up a new full length back bar for an Ifor Williams 505 this morning. It cost just £41.13. Not much to pay in the great scheme of things.

By contrast, there are some very conscientous owners around. Patty, who used to work with me, is planning to go to a clinic in a few weeks time and is hiring a man and a trailer for the day. In the meantime she has booked two loading sessions and is going to borrow my trailer for a week to make sure that Bobbin is totally at ease with loading before she sets off. It's very easy to be excited or nervous on the day and much better to work with no pressure beforehand. Another lady has just bought an Equitrek trailer so that her horse can enjoy travelling backwards (most horses' preferred option) and is going to get a CCTV so that she can keep an eye on her horse as it travels.

On Saturday last week I worked with a Welsh pony that struggled to stand upright in the lorry. The driver wasn't to blame as he always drives smoothly and relatively slowly - chauffering the horse rather than transporting it. At one stage this pony has leant on one of the partitions and it gave way and now he doesn't trust them. Like many horses he goes "into pressure" and leans into it and almost falls over and appears to become comatose. Our job was to gently manouvre him to encourage him to put his weight on each foot and to keep him conscious by talking to him and distracting him. This worked really well. His owners have been experimenting with different widths of compartment and found that his horse is happiest with a wide space and right next to the back doors which are sturdier than the partition. He also prefers to be without boots.

The best bit of advice I have heard about journey length is to make sure that it is more than twenty minutes. If you stop a horse's journey while he is still full of adrenalin then he is sensitized whereas if you stop when the adrenalin has fallen he is de-sensitized. Of course, if a horse in imminent danger then you would stop anyway.
Posted by Loisaba Wildlife Conservancy at 7:32 PM