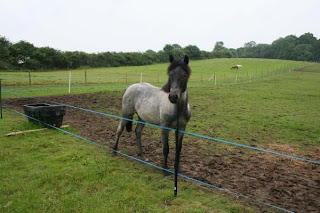 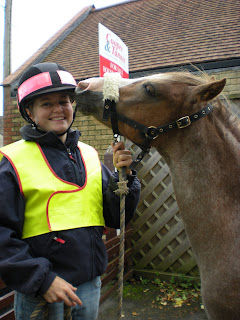 I have just worked with my 500th horse since I became an RA. Needless to say, he was a New Forest Pony and his name is Astro.

Whilst there is a definite shift towards owners who want to get it right first time, I'm still getting called to remedial problems and the occasional emergency. Little Simba, a Welsh Section A yearling, had been bitten on the nose by another horse. Having been rescued from owners who were inclined to shout into his face, he was already very wary of people being anywhere near his face. Although he is only 11.2 h.h., he has learned to launch himself at people's faces and to bite whatever flesh he can find. We worked on asking him to relax and make a "nice face" as people approach. By breathing out as we got closer to him, we could induce him to relax and as soon as his little (flat back) ears relaxed and he looked pretty again, we would move away to reward him. It's a question of seeing what yu want and finding a way to reward that. If he did attempt to bite, he was discouraged with a little kiss-kiss noise and a fluttering of the hands. By the end of the session we could touch him all over and gently handle his face and even his lips. I was able to bathe his nose. This little pony has landed in his feet with a very empathetic owner who will do everything she can to convince him that people can be trusted.
Posted by Loisaba Wildlife Conservancy at 9:57 PM