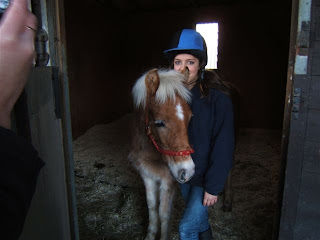 Last week I went out to load Wellow Leaf (Baby) so that he could go to his new home in Buckinghamshire. He has arrived safely and is clearly adored by Linda's grandaughter. Such a personable little chap.

I received this e-mail from his new owners on 5th January, 2009:

My baby boy has settled in so well I just cannot imagine life without him. I have got into a routine with him I stable him at night and he goes out first thing every morning. When I go round to get him in the evening he is waiting at the gate for me. He walks very well beside me I have followed all your advice and I was saying to R tonight your way really works. I know problems can crop up but I know you are always there on the end of a phone. The only problem R says we have got is the lack of housework, he says its gone to pot since that foal arrived.

I have advised them to get a cleaner.

A couple of weeks ago I also went out to see Monty, a horse that I taught to load about two and a half years ago just as he started his career. I was somewhat dismayed to hear that he had gone on strike and wasn't willing to load into his new owner's horsebox. Age old problem here, the very new smelling horse-box is rear facing and Monty just couldn't work out where he was meant to go. Once we had treated him like an articulated lorry - you need to walk into the left hand corner and then turn right(!) in order to make sure you have enough swing , he was absolutely fine. This took me back to my early days when I met Goliath, a beautiful coloured horse that was having the same conundrum.

I got this e-mail from Monty's owners yesterday: Yesterday, 20th, we took Monty on his first trip to the Fortune Centre outside Burley for a Dressage test. We brought him in the previous evening, because there was to be a very early start. He was fed just after 7am after which he was groomed, plaited, etc. and the box prepared. He loaded at 8am impeccably. He just walked into the box with zero fuss. It took an hour to get to the Fortune Centre which is big and busy. He did a very controlled and positive test so we were both delighted. We left around 10am after another immaculate loading, and got him back to his mates in the field not long after 11am. On Tuesday the mail should bring us the test results so we’ll find out what the Judge thought of his performance.
Posted by Loisaba Wildlife Conservancy at 1:26 PM