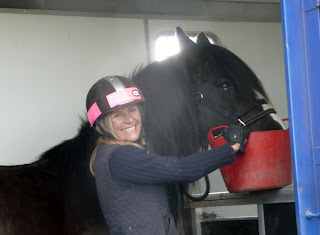 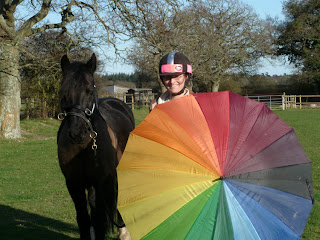 Back to work with a vengeance. Yesterday I went to work with three black horses of various sizes. Two of them needed loading practise in their new horse-box. With rear facing horse-boxes it is very important to 'explain' to the horse where and how he needs to move, heading for the left hand corner first and then asking the horse to move his bottom over. It's easier if the handler leads from the right but it can feel a bit weird if you are not used to it. The owners of this trailer have taken particular care to make sure it has a safe layout and it has a retro-fit guard over the breast partition, shaped to allow room for the horses' heads but making it impossible for them to go over the partition.

The last black horse is 17 but still quite nervous of novel items particularly if they approach him. We worked on overcoming his fears and although he was still wary, he was willing to give everything a go.


"It was great to work with you again today - you make the sessions very informative and also fun! Yep, there's plenty for us to be getting on with for sure, thank you."CJ

Update 26th March: Visited the pound shop for a cheap feather duster on an extend-able pole and did a desensitization session yesterday and Santi was brilliant. A little unsure of it going nearer his ears, but didn't move his feet off the ground once, bless him. On Friday Jane's friend rode him and a gateway pole (at the top of the track) fell in front of him as he was about to step through it and he didn't move - it had been damaged by a lorry going into the nursery a few days previously. In fact her friend said she couldn't believe how chilled he was the entire ride. On our Sat ride there was a lot of noise coming from a flapping cover on a trailer in a field backing onto the track (never seen/heard it before) which he jogged/shot past. On our way home I had dismounted at the gate and led him past it, just took 2-3 times to walk past it both ways before he visibly relaxed. It's so useful to know exactly what to do in these situations now! "CJ 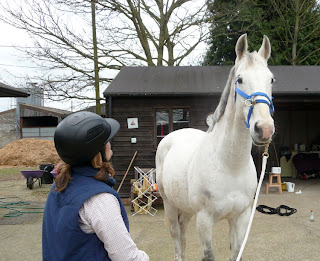 By way of contrast, literally, it was time to work with Burgoyne the ex-police horse. We worked on his anxiety about being separated from his girlfriend and his reluctance to go into the stable unless she is with him. By redirecting his energy and keeping him busy, busy, busy, we were able to bring his adrenalin down and then, by using clicker, I started asking him to volunteer to go into the stable.
Posted by Loisaba Wildlife Conservancy at 7:27 PM