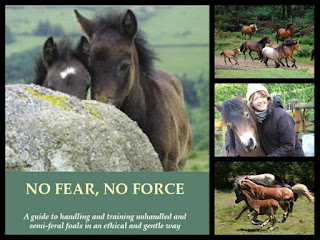 Oh yes, it's that time of year again when lots of semi-feral ponies make their way to the sales either totally wild or having been halter-broken, sometimes in a none too sympathetic manner. No Fear, No Force has been a standard text for some years now for anyone hoping to handle and halter train their foal in a gentle and ethical way. Copies can be ordered through my website: Logical Horsemanship or through Amazon. It also works for older ponies, traumatised and just shy foals. 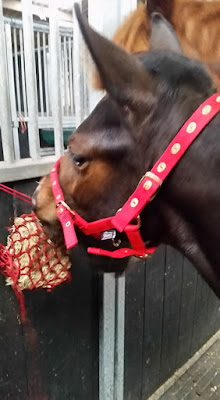 Ginny, posh name Emancipation, had to have a headcollar on for her grading and microchipping but was none too impressed and becoming rather wary of having her head handled. After learning No Fear, No Force techniques, Debrah took the original foal slip off and began training her using a soft scarf. This is the outcome...

"Omg! Absolutely delighted to tell you all that using no fear and no force methodology as taught by Sarah Weston only 13 days following learning the technique I have today successfully applied a bright red halter to my special little girl Ginny." DB