Rosy and I had to delay the fitting of the final piece of the jigsaw in Zebdi's training whilst we both underwent surgery and recuperation, she for her knee and me for my thumb. However, it appears that Zebdi has either been practising or giving it all a lot of thought over the hiatus. Not only does he now accept the needle-less syringe with equanimity, but he also let's us hold on to his head by any part of his headcollar, something he would not have tolerated before. Tracey and Rosy took over from me so that we could make sure it wasn't just a Sarah fluke, and he was absolutely fine. 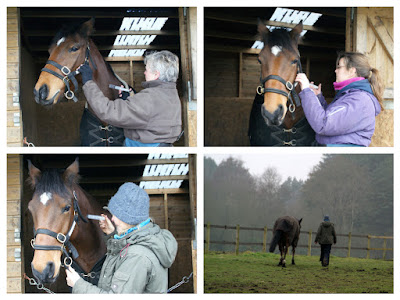 Rosy can now carry on practising without me, ready for the vet's visit at the end of the month. That visit may put him in an 'overdraft' again but hopefully some regular deposits before and after the event, will keep him in the black over the long term.