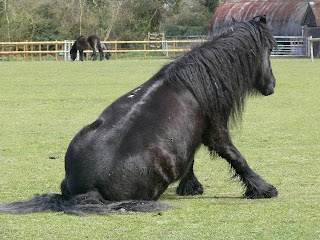 (First, sit the horse down!)

Horses are not born knowing right from wrong - particularly when we are talking about what a human would see as right or wrong. So barging for example, is the right thing for a horse to do to check out where he stands in the herd hierarchy, kicking is the right thing to do if it gets predators off you, biting repels rivals. We just can't expect a horse to automatically know that it shouldn't be doing these things to us and it's no good us trying to sit a horse down and explain to it in English - horses don't understand English. The best way to explain something to a horse is in using consistent body language set at a level that makes it clear that something is, or is not acceptable to us. I might be subtle on the first couple of occasions - once is once, twice is twice and three times is PERSISTENT. So, if a horse persistently walks into my body space, depending on how sensitive the horse is, I would then use big body language to ensure that the horse was very clear that this was not acceptable. I might stamp a foot, slap my rope on my coat, make a kiss-kiss noise and use eye contact to send it back out of my space. Simply saying "no" would tell it nothing. I need to show it "no" instead. Once the horse is back where I want it to be, I need to show it "yes, you got it..." by putting the smile back in my line, maybe saying "goooood boy" and perhaps giving him a lovely rub. By being black and white in this way, the horse gets a much clearer picture of what is and isn't wanted. There are three main rules that I would enforce using big body language - You don't walk into my space, you don't walk past me and you don't attack me with your teeth or feet. Everything else is a request and I start off small and only get big if I need to. In this way the horse learns to respond to the softest request and the biggest I would get would be pressure on the Dually or reinforcing something with a shake of a rattle bottle.

Driving enthusiasts always tell me that their horses do understand words and I expect that some horses do understand a very limited number of words. However, I think they are more likely to be understanding the tone and body language that come with them. A good friend wrote to me about this and this is what I said in reply:

Hmmm – words. I don’t think that horses do understand set words although I think they definitely understand a tone of voice and recognize people from their voices. I have experimented with standing in front of a horse that apparently responds to the word “back” and found that if I don’t accompany it with any body language it just stands and looks at me blankly. On the other hand if I use the Hindi word for back (which is “peechay”) and accompany it with some body language it will back up. I also experimented with Sheila’s dog Echo – I found that I could say any three letter word in the right tone of voice and he would SIT! The funniest bit was when I said elephanT and he still sat – so I think he was responding to the rather Barbara Woodhouse T at the end of the word. Driving ponies are thrown back onto their hearing by their blinkers and perhaps like people with a visual impairment I could develop their other senses – yet again though, most people have a specific way of saying particular commands and proper driving people always say the pony’s name before the command when they intend to go up a gear and the word “and” before the command when they want to go down a gear. I often used “and” in this way and have found that horses do start to slow when they hear it.

Clicker training also sharpens up a horse’s hearing and therefore I can see that calling their name and then giving them food when they arrive would do the same thing.

Unlike some natural horsemanship trainers, I don’t put an embargo on talking to the horse although I do warn people about the dangers of white noise that you mention. However, if someone is too reliant on words and unable to be demonstrative with their body language, I do sometimes ask them to think about not saying anything – and of course I always advise people not to speak at all if they are in danger of going up an octave and speaking very quickly when they are nervous. “Steady! Steady! Shhhhh!” is Equus for Panic! Panic! I think it can help to talk to a horse in a soothing tone of voice and as you know I have pet phrases like “You didn’t die yet” and “Nothing’s changed, you’re fine” and it makes me smile when I hear Julie and Sheila saying them too. I think just talking quietly and slowly to yourself can do a lot to calm nerves and keep you breathing and if I have a feisty horse that I am having to send out of my space, saying “don’t come past me, ever!” helps me to get rid of adrenalin.

I just think it’s better to use body language most of the time so that in an emergency there is no question of the horse having to translate anything.
Posted by Loisaba Wildlife Conservancy at 5:41 PM