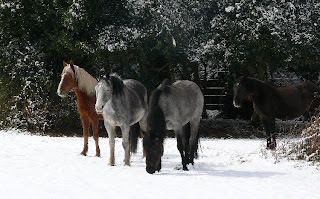 Having made significant improvements to the behaviour of hundreds of horses now, I stumble when I hear the word failure. Have I failed Piper when he will only just about let me touch him after all this time or is it still brilliant that he will allow me to put a headcollar on him using clicker training? This is the pony that lived wild on Exmoor for seven years and only met brute force until he met me. Is it failure that a horse wants to back out of a trailer when he has previously gone through the floor of one or amazing that he will follow me in at all? Is it my failure when I meet an ex-racehorse that goes into stallion mode when he is taken out to his field when I cannot work with him safely because there is barbed wire on both sides of the track? Is it failure when I can't work on handling a wild pony because the field shelter is awash with mud and once again we are surrounded by loopy barbed wire which he has jumped before?

The best successes come when I am able to set the owner up to continue with some good techniques backed up by clear concepts about consistency and commitment. Like everyone else I like to set myself up for success in the first place - Kelly says a poor workman always blames his tools but a good workman always has the right ones. To work with difficult horses or horses with problems going back years is to invite failure (or only limited success) but the alternative is not to try at all. When I worked for the courts, the probation service were criticised at one time for only recommending a probation order for those where there was a high chance of success - when the effectiveness of a service is only measured against recidivism rates then this is bound to happen.

I have also been struggling with the concept of ego. Running a demonstration is a bit like holding a party in your house, as the host you are so worried whether everyone is enjoying themselves you forget to enjoy it yourself. At the RDA demo I never felt that I really got "in the moment" with the horses and I wish I could have spent more time really getting to know them. Being separated from the audience by round pen rails (bars!) I didn't feel as connected with people as I could have done and having a microphone at my mouth I was all too aware of everything I said. I do however get a kick out of live appearances but would hate that to become my sole reason for doing it. The best work is done with horses when you let go of your ego and any pressure to succeed.

As a complete aside.....is it really Christmas again so close to Easter?
Posted by Loisaba Wildlife Conservancy at 6:31 PM