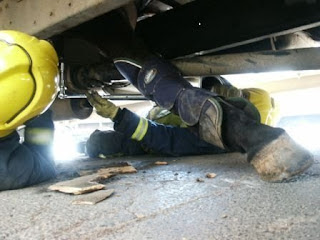 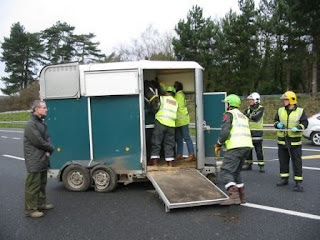 Pictures with kind permission of JG.

Last night attended the most inspirational talk I have ever heard by Jim Green, Animal Rescue Specialist for Hampshire Fire and Rescue Service on the latest developments in training and equipping fire officers to deal with animals, often horses, in distress. Hampshire has now been asked to co-ordinate training nationally and are seen as the leaders in this field. Jim was extremely well up on horse psychology and had some brilliant footage of dramatic horse rescues – good and bad examples. The aim is to really think things through before getting too deeply involved with the rescue itself so that it is clear where the horse will end up once it is freed and how to ensure that the horse is kept as quiet as possible during the rescue itself. Six years ago Petra managed to jump into a huge drainage channel which leads down to the River Avon. There was a horrible moment as she realised that the greenery in the middle of the channel wasn’t solid and an almost comic element of flailing legs a la Tom and Jerry before a huge sploosh. I was amazed at how quickly the cold and depth made her give up and accept that she would die and without the Fire Officers from Fordingbridge station there was no way we would have got her out. Although they are not a charity, they do accept donations towards specific equipment and training for their officers which all goes towards working with horses and developing a general pool of expertise across the country. At the same time, officers are involved in developing specialist equipment such as long distance cutters to release horses tied up in trailers and quick release webbing straps with which to extricate them without officers having to go into the trailer at all. Fantastic stuff. More information under Animal Rescue on www.hantsfire.gov.uk

I had a bit of a light-bulb moment as I watched some of the video cuttings. Jim is compassionate about horses, passionate about getting the right tools and techniques for the job but brutally realistic about safety - if the owner is impeding the rescue, they will be asked to step back. I am sure that most people would be reassured of they knew that the fire officer involved knew exactly what they were doing and understood how horses work. There was a clip of an American vet, killed outright when hot-branding a horse in a makeshift crush. Although he was on the outside, the horse kicked him with absolute accuracy and certainty. Horse owners should not delude themselves; horses in stressful situations can react very violently and be utterly lethal. Another heart stopping clip showed two ridden horses that had gone through the planks on a bridge leaving both of them stuck. The horses had gone quiet and passive, perhaps accepting their fate, until the woman owner starting shreiking for someone to get a vet. Both horses then started to struggle and both went over the edge of the bridge narrowly missing the owner who had also gone into the drink and a firefighter who was underneath working on dismantling the slats. Nowadays the horses would be sedated and kept calm until it was safe to move them. (Incidentally, why don’t vets wear crash helmets when working with animals in pain/fear?)

RAs strive to be honest with people about their horse’s potential to cause injury without classifying horses as being evil or dangerous in themselves; they are just horses doing what they think they need to do to survive or influence a given situation. In these days of litigation, we have to think like health and safety officers and constantly assess risk without emotion.

The Horse and Hound is full of reports of people being successfully sued for compensation when their horse has injured a third party – even when that third party volunteered to be involved with the horse. I would think twice these days about letting any else ride my horse. If you know your horse has a behavioural problem, you are under an obligation to make sure that anyone dealing with it is aware of that – failure to do so, even to highlight obvious risks, is to risk being sued for negligence. I am amazed at how dishonest people can be when they are desperate to sell their horse although I do accept that a new owner can change a horse’s behaviour for the worse in no time at all. Working with horses without insurance is foolhardy too – I made my insurance company sign to say that I was covered for each and every heading of the work I do. I always think that everyone is your friend until an accident happens and even then it may only be their insurance company or their immediate family that wishes to make a claim against you.
Posted by Loisaba Wildlife Conservancy at 9:40 AM