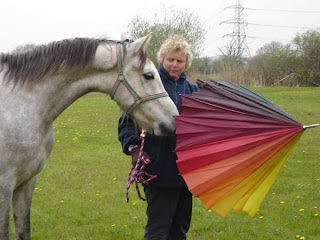 It's not what you think. Today I have been working with a cob who looks like a small version of a Clydesdale. He is the most "into pressure" horse I have ever met and whenever I stood in front of him, even at a distance, he took this as an invitation to walk straight through me - and I mean straight through me. Fortunately by the end of the session I was able to persuade him that standing still was a better option. I also worked with a Quarter Horse that has changed out of all recognition since I saw him two weeks ago. Thanks to his owners being utterly consistent with him and consistent with each other, he is now looking so much calmer. He brought a rather difficult week to a close.

On Monday I had a small gynaecological operation under general anaesthetic and felt absolutely lousy for two days afterwards. Still, the fact that the consultant was a Mr De Kock brought an air of hilarity. On Thursday I worked with an 11 month old cob cross who was a darling and then went on to work with two New Forest stallions aged four and five that have not been handled very much. I used clicker training to get the first headcollar on the younger one and then couldn't get rid of him - please put the headcollar back on, please put the headcollar back on, please...... These two live on a farm with hundreds of other animals including goats, sheep, cows, chickens, ducks, cats, dogs, pigs and have been together all their lives. The following day I worked with a difficult loader that flies backwards whenever anyone approaches the back of the trailer. David and I went to a barbecue tonight and I lasted all of fifteen minutes before I wanted to go home to sleep!!

Nelly has still not had her foal despite being really huge. She keeps disappearing for days on end and worrying me stupid but then turns up with Oliver in tow. I hesitate to say it again but she is imminent.
Posted by Loisaba Wildlife Conservancy at 10:50 PM