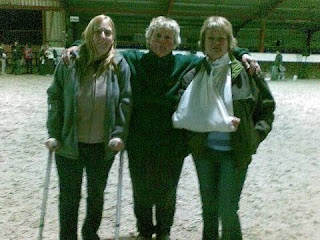 Helena (fell off Bertie at Exmoor's Golden Horseshoe) and Mandy (had a fight with a gate when leading a horse out of the field) at Kelly's demo.

Kelly's demo at Hoplands Equestrian Centre was terrific. With no seats allowed in the arena, it was good to see the round pen vanish after the first starter so that the audience in the gallery were close to the action. Pie and Caesar were fabulous fun, jumping and side stepping through and over various obstacles. Caesar, who is only four, stole the show. The trailer loading horse at the end was a good solid Welsh cob and when he said no he meant it, seconds later he's going up the ramp and in without a murmur. As usual Kelly was unselfish about sharing her techniques, explaining every detail and also sharing the limelight with the Recommended Associates. Loads of my clients were there along with lots of New Forest pony owners.

Posted by Loisaba Wildlife Conservancy at 4:32 AM