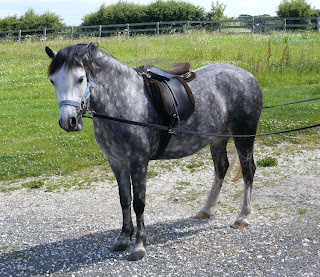 It's been one of those days, no, one of those weeks. On Monday I got lost on the way to somewhere I've been before and then the horse I was meant to be loading had a bad eye and I couldn't work with it. Yesterday my Satnav gave up on the way to somewhere that wasn't shown on any map. Today I had arranged to meet the vet, the owners and the potential owners of a horse that required an urgent blood test. The vet arrived 3/4 hour early, someone had taken the horse's headcollar off and the day before she had had to be forcibly restrained because of her behaviour and therefore she was adamant that she wasn't having the headcollar back on again. With this little lot queuing up to watch, some of them on a meter and me desperate for a wee, I had to persuade her to be caught again - no pressure then!!! I did manage to do it but it seemed a little unfair when the next thing is that she was stabbed by the vet. Repeat......I must not get involved or emotionally involved especially when I'm not being paid and only doing it to be helpful. That's a long sentence and I shall forget it within days. I might even start to see the funny side.

Because money and sometimes pride is involved, I am often called as the last resort for untouched horses and that's usually because there's an emergency looming - either overgrown feet or some veterinary procedure. Now, I am good at taming wild horses but to have a predatorial event so soon after they have placed their trust in a human for the first time is more than unfortunate and very likely to set them back a long way. In some cases it just can't be helped but it doesn't make my job or the owner's any easier. Sometimes the transition from frightened untouched horse to amenable friendly horse can seem miraculous but pleasant experiences have to be repeated over and over again for that trust to become ingrained. I think I have said that in three different ways now - the first time I hope you wrote it down, the second time you might have underlined it, if I say it again I've no doubt you will rub it out!!

I am always pessimistic when I am asked to handle a group of wild ponies just so that they can be handled by the vet. This is an unrealistic expectation. Before a pony can accept the unpleasant and sometimes painful attention of a vet, it must have an account full of pleasant experiences. To get a pony to that stage requires a great deal of time (and money) and could mean that the pony will talk to strangers and tourists. You can't really have it both ways.

On a lighter note, the pony at the top is Knickers. We were enjoying a long reining session when the vet arrived early at my other client's. Now I am sure that no-one would expect me to drop my Knickers just because of a vet!
Posted by Loisaba Wildlife Conservancy at 2:50 PM