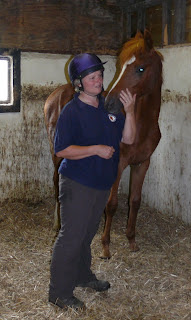 A good start to this week too as I went back to an arabian stud to work with a yearling colt that has never been touched other than on his own terms. I was somewhat intimidated by how tall and leggy he is. Although there isn't an ounce of aggression in him, he could reach a long way if he decided to point one of his legs at me. He was very flighty to begin with but within a short time he was accepting touch and then obviously enjoying it and by the end of the session I felt quite a bond with him. He had his headcollar on and off three times to finish the session.
Posted by Loisaba Wildlife Conservancy at 9:59 PM