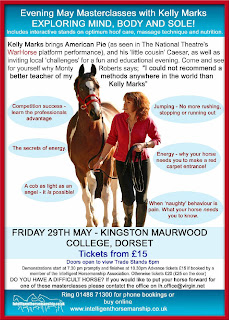 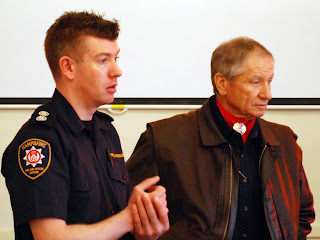 Jim the Fireman was a guest speaker at the RA Conference this week and seemed to go down a storm. Hopefully Intelligent Horsemanship will be able to help with training for animal rescue teams around the country. I have told Cello that he might need to be a 'rescue' horse and have started putting straps around his tummy to see how he might react. He was completely unfazed so the next step will be to lift him off the ground!

I won the prize for the most evaluation forms which will be a two day course in April with guest speaker Gerd Hauschmann, an expert on the bio-mechanics of the horse. I am really looking forward to that and will sharpen my pencil before I go.

Today has been a very pleasant day with my own ponies and horses. Petra is sound again after a short period of lameness. I shall start working her gently from tomorrow. Chancer is long reining out and about on the Forest and seems to be perfectly content going out on his own. It's so important to realise that racehorses have led rather a cloistered life - they walk, trot, canter and gallop in the same places at the same time every day, and don't go out on their own. They are mounted while they are circling and a pull on the mouth generally means go faster. They have very little individual attention and don't socialise with other horses once they reach a certain age or stage. Chancer, like most racehorses, seems deceptively quiet most of the time but when he does wake up he can react and move very quickly indeed. I also spent a little time with Piper who is almost due for his annual feet trim. I had hoped that he might not have to be sedated but he is still terrified of having his legs touched for any length of time. Still, he enjoys being brushed and stroked. That's all I ask of him these days.

At long last my main website has been tarted up. Julie has made an amazing job of it. There isn't much to it - static information can never be all that exciting - but it looks a lot smarter. http://www.logicalhorsemanship.co.uk/

Looking ahead, I have three demos arranged for the Spring. The Open Day at the Caspian Horse Society as previously mentioned (19th April, 2009); a demo at Horseworld, Bristol on 10th May at their open day and a loading demo for the Travel Safely Campaign at the Countryside Day at Sparsholt College on 16th May, 2009.

All of that is followed by Kelly's May Masterclasses. There are two locally - one on 22nd May at Wellington Equestrian Centre and the other on 29th May at Kingston Maurwood College near Dorchester. I shall go to both.
Posted by Loisaba Wildlife Conservancy at 4:17 PM