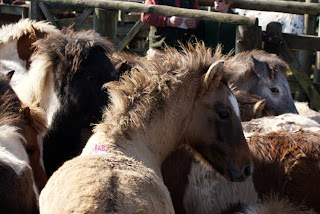 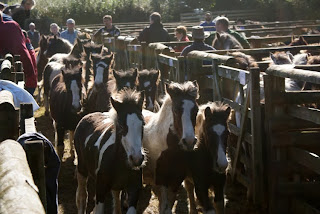 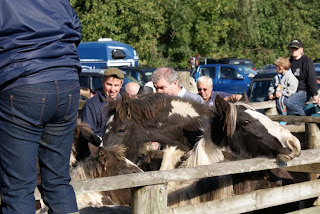 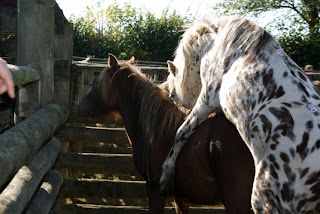 Pictures from Chagford Sales
There's been a small miracle been going on in a cosy barn at the end of a track at the bottom of the moor in Widecombe, where 18 freshly weaned and frightened foals have been transformed into confident little bodies. It's traditional and convenient to abruptly wean foals here and at the sales, there were foals that looked as if they were under four months old being sold off for ten guineas.

Only three of the foals that we had had been through the sales and predictably they were the most challenging to work with through no fault of their own. They were frightened of hands. The rest were brought direct from the breeders.

I was frankly blessed to have the students that I did, all horsey and many of them highly experienced. My team of tutors were fantastic too enabling me to offer one to one training for everyone; all of us give our time for free. By the end of day one, we had worked quietly with three sets of ponies and all of them were accepting first touch – initially with the feather duster (telescopic no less and only £1.75 each from The Red Bazaar in Okehampton) and then with hands – all the way from base camp one at the withers to base camp two on their bottoms and then up their necks and down their faces. Our one yearling, Courage, was very enthusiastic about having his hair done and Claire, who had bought Dreamer through the sales was able to remove the first of the three lot stickers that had been glued to her pony's back.

Day two saw calm and soft-eyed ponies gently ambling down to the pens where we worked with them in batches of six, introducing their first head collar perhaps after desensitising their face with a soft scarf. Bearing in mind that by now each pony had a maximum of three hour's training, half of them were now being taught to lead by moving them around very gently within their pens. Even Dreamer was accepting a hand all the way down her neck and up to her ears.

With the exception of Dreamer, Boo and Hope, all of the ponies are for sale from their breeder or available for re-homing from the DPTC. The dark ponies, little bays and blacks, are the most typey of the Dartmoors and yet at the sales many are at risk of being unsold and therefore at risk of going for meat or being shot at home. This year they are more at risk than ever. The fashion for coloured ponies appears to be on the wane too and some of those go unsold too or end up in the hands of dealers. The biggest trend is for spotted ponies and they were fetching the most money at the sales although even then one Appaloosa stallion didn't meet his reserve.

The sales at Chagford on the day before the course started were a nightmare with overcrowded pens of mixed ages and sexes so that in one open big coloured ponies were trying to climb over one another to get away from the handlers and in another two colts were either fighting or covering recently sold mares bringing a whole new meaning to buy one get one free. It took an age for anyone to do anything about it. The ponies were frequently hit even across their faces to move them from one pen to another or to block them down the passageways. There was no attempt to separate the terrified ponies from the general public. There was no water or hay from the ponies although I was pleased to see that in one pen, where the owner had taken a great deal of care to advertise her ponies' breeding, there was a big haynet with three ponies tucking in enthusiastically. I was also relieved to hear that some owners had put a reserve on their ponies in the hope of diverting them away from the meat man if they didn't attract enough money. I understand that the abattoirs are inundated anyway and not accepting small ponies so readily. However, one breeder said to me that she would prefer her ponies to go “in the wrong direction” than go to all these do-gooders. I was hard pressed not to tell her that in my opinion she was a do-badder. Her pen included lots of very pretty ponies and some really tiny foals. The ponies may be essential to conservation, the preservation of the breed and the continuation of a tradition but that doesn't make it right not to take responsibility for where they end up. The lovely man who loans us his barn has taken radical steps to reduce his herd and is trying to persuade the powers that be to subsidise geldings rather than just mares so that his ponies can continue to graze the moors, doing their job, but not produce an unwanted by product. Their final destination aside, there is no excuse for the rough and unsympathetic handling at the sales – ponies can be moved around very quietly if people choose to do so and stop playing at all the macho rubbish. I have to compliment the serenity of the vet who was on the receiving end of the sales ring and very accurately and quietly micro-chipping the foals as they made their way through the crush to the holding pens before going on to their next stop.

I have to draw a very firm line between being a horse trainer/RA and becoming an animal activist. It has to be better to do things form the inside rather than to attack from the outside but it is extremely difficult to look these ponies in the eye. They pay the price every time whether they head for the meat man, the dealer or people who have no idea how to train a wild pony and will simply get rid of it if they fail. Hopefully we have managed to throw 18 more starfish back into the sea and to train ten more people how to throw back even more.

Somewhat inevitably, I agreed to continue training the foals throughout the next week of my holiday and a number of the students volunteered to come back for the odd day so that we could consolidate the work we had done so far. On Thursday Boo and Hope went off to their new foster home. By then they were really tame. Dreamer was much more relaxed and had her head collar on and off. Several times I made good use of the scarf in her case and eventually put the head collar on over the top of it – the feather duster and fabric approach seems to have a very calming effect on these vulnerable foals.

The DPTC is the easiest charity I have ever worked with with no egos or separate agenda to fulfill. Their flexibility and support throughout the training weekend has been immensely helpful and I have no doubt that we will be back again next year. We're planning a five day course this time.
FOR A FULL SET OF MY PICTURES FROM CHAGFORD SALES GO TO:
http://s22.photobucket.com/albums/b333/Sweston/Chagford%20Sales/
Posted by Loisaba Wildlife Conservancy at 6:22 PM