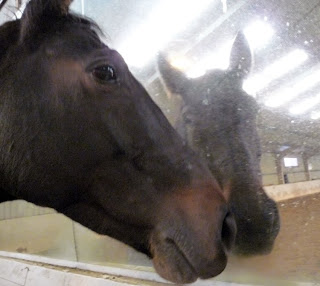 "Oh no, is that a lorry?" D-horse watches the lorry pull up from the top end of the school.

Yesterday I went to a yard where it seemed that a good percentage of the owners were open minded and interested in all things "natural". I wish I could find a better description than that - psychology-based horsemanship sounds so lumpy but that's what it is. Throughout the day different people wandered down to watch what we were doing and to lend a hand. I worked with the owners of two non-loaders and their horses, one of which was the spit of Petra P. The first was a 28 year old who had gone on strike after some really helpful person (where do these people come from and why do they think it's okay to get involved?) came up behind him and walloped him with a piece of pipe. His owner wants to be able to take him to the vets in an emergency and to enter the odd veteran class during the summer. We don't know the full history of the Welsh Cob, but she was inclined to run backwards when she saw anyone come up behind her - usually a sign of a horse having been hit to get them on to trailer or lorry; how that's supposed to make them easier to load in the future I don't know but I suspect people are just happy to get the horse shut in and don't care about the long term consequences. How does the horse know that the hitting will stop once they are in the box? No wonder they don't want to get trapped again. In any event, we worked slowly and steadily with her and by the end she was going in very calmly and we were able to put up all the bars without her panicking or running backwards at all. Both would benefit from another session and a lot of very quiet practise before going anywhere. In the meantime I got a telephone call to say that the mare from the day before had loaded again and was far less stressed - no sweating and no twirling around. And then, this morning:

"HUGE progress. kept lorry an extra day so could do some stuff this am. She came to door of school to be caught today when I parked lorry by door and was curious about lorry. She went straight in with no effort a few times. She was eating in lorry after short time and I tied her up ok and then shut partition without any problem. Left ramp down. Thought I had done wrong thing at first and she broke out in sweat and started to steam and piaffed a bit and was not happy but I stuck with it and didn't get anxious myself and then she got interested in what was going on around her and distracted herself from her anxiety and got interested in the food and then realised she wasn't worried and was in a lorry and got worried again but in a short time she was calm eyed and eating and not sweating. She did several out breaths to let the tension out. At that point I opened partition but left her in lorry and she settled again with partition open and she ate some more and I walked her out. She was very calm and went straight back in again ok . Let her go to roll and she stayed hanging out by door sniffing lorry and watching what I was doing. Let her eat rest of food and she still stayed by door. The only time she moved off was when i actually started the lorry so need to desensitise to the engine running. but she came straight back after a canter round school and had her head over school doors watching. Walked back to stable calm as a anything. BIG change and so fast. Thank you so much for your help. I hate her to be unhappy and it is so great to see her overcoming her fears and limits and feeling like I am helping rather than hindering. always happy to give you a testimonial if you ever need one. You work miracles." HR (owner of D-horse)

My other client yesterday, Anna, has a Dales mare who like a lot of black horses seems to be very sensitive in her skin. Anna has seen and read about a lot of trainers like Richard Maxwell and Mark Rashid so we had a splendid time just tightening up her groundwork so that it was even clearer and her pony could afford to relax completely.

It was a long day for me (ten hours all round) but very rewarding. Nice horses, nice people. Perfect.

"Anna and Ebby here, and I just wanted to say thankyou for our session yesterday - it was brilliant to get an expert's eye on what I've been doing, and to find that it was mostly all good!! Later in the evening I brought Ebby back in to the yard to go over a few things, and as soon as I caught her I moved her backwards, forwards, then up the field and she caught on straight away that she was to be right next to me so I could see her hairy head!....Sorry about the essay - my brain is swimming with horsey theory, which I love!" AM
Posted by Loisaba Wildlife Conservancy at 10:07 AM