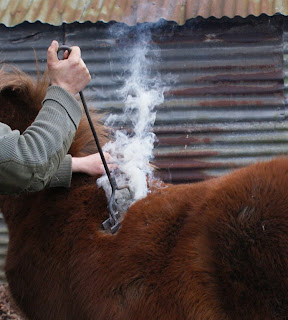 I haven’t put anything too controversial on here lately so here goes.

I hate hot branding. I do think it causes pain and I think it can traumatise ponies. For those reasons, I started off feeling that it should be made illegal. Now that we have microchips which give a unique identification number, there should be no reason to hot brand a pony that is going to live in a herd owned by one person in one place whether that be a moor or a holding, “in ground” or a pony that is definitely going to be sold on and domesticated. Branding or the purpose of proving a pony’s eligibility for registration by a breed society cannot be justified nor for reasons of pride or tradition. Microchips in horses do not migrate as they are inserted into the nuchal ligament. Microchip readers are now available which can read any microchip.

However, I have come to the view that at present there is no viable alternative to hot branding where free-roaming ponies of inter-mixed ownership need to be identifiable from a distance. Sadly, microchips cannot be read from more than a metre away (at the very most) and there seems to be no huge incentive for electronic engineers to develop Radio-Frequency Identification devices that can inserted into an animal - this is not the lucrative racing industry where research and development is well funded.

At present RFID’s as they are known, come in two types. One that can only be “read” – with the same limitations as the microchip and another that will “answer”. This latter requires a battery in the answering device and that battery may leak and has a limited life (certainly less than the life span of a horse). I understand that this type is being used in humans (!) who may be at risk of kidnap. Sheep and cattle farmers make use of this technology but here, the RFID is inserted into an ear tag which is put through the animal’s ear. The process of inserting an ear tag would certainly be very traumatic for ponies and in any event these tags are frequently torn out. If anyone knows more about this technology than me please contact me. I would be delighted to test an RFID which could be read at a distance on my semi-feral ponies. If we can track dolphins and birds and eels then we should be able to track ponies too.

Without a device that can be read at a distance, Commoners whose ponies are depastured on the Forest where there are thousands of ponies, will find it very difficult to identify their own and to check on their welfare. I only have three ponies out there and they are all friendly and come to call, but one of them, Nelly, looks like every other bog standard bay New Forest pony and I have to work hard to find her in the summer; in the winter she’s waiting at the gate. It just isn’t feasible for commoners to have to drift in or colt-hunt every time they want to check up on their pony especially when there are foals at foot. Drifting itself is a quite a fast and dramatic process and I am sure I wouldn’t want mine going through that every time someone felt that they had to get a group of ponies in to check their identity. If the Forest was divided into an invisible grid, you could ask commoners to oversee the welfare of those in their given area but I doubt that they would co-operate or see this as practical; I'm not sure that their standards of welfare are all on a par either. There are five agisters currently funded through marking fees paid by the commoners. They already have a really wide remit and I doubt that it would be feasible for them to be able to check on every single pony on a regular basis.

It has been suggested that we use dye to mark the ponies. This is a possibility, but, unlike sheep, horses roll a lot and moult on a regular basis. Unless someone can come up with 500 different colours to represent the 500 different commoners not only would we need a long lasting dye but we’d also need to be able to make symbols with it.

Freeze-branding is not an option either as it requires the pony to stand still for a lot longer than a hot brand. In my view freeze branding is still a painful process and much more prolonged than hot branding. Overall it has a higher trauma factor for an unhandled pony than hot branding and is just not practical anyway.

I would add that there needs to be a hard look at the standards of branding as carried out by the various practitioners and those that are inept should forfeit their right to brand at all. The standard of branding of some Exmoor ponies is appalling. Here, the brands are often heated with a blow torch and when they reach the pony they are not hot enough and some have to be re-applied. When you think that these ponies are also branded with three separate symbols, this is cruelty, especially when it has been shown that the brands are not a credible indication of a pony’s status for registration (subsequent DNS tests have highlighted the flaws in this system). I am told that ponies cannot be sedated for branding because they need them to react in order to know that the brand has been successful. This is rubbish, a hot brand applied quickly to a clipped patch should be applied for no more than three seconds.

Hot branding is just one part, no doubt a significant part, of a process that seem to be set up to traumatise ponies – sometimes for life. Abrupt weaning, forcible haltering and tying ponies up to something solid so that they can be inspected and branded are all likely to cause trauma, both physical and mental. Taking away the branding element won’t stop these practices and if not branding means that ponies have to be manhandled more often, it could have the opposite effect to that intended by those seeking to have it outlawed. At least with hot branding, the pony can be branded and then left in peace between annual drifts.

I never thought I would end up in this position but the prospect of not being able to find a pony of mine within the thousands that are on the Forest really does worry me. I take great care of my Forest ponies but if I had a very wild one that went walkabout, I would be stuck unless it had some unusual markings. I don’t want to be reduced to only being able to check my ponies once a year or to be relying on someone else to do it for me. Yes, I could keep them in, but I like the life they live and I think they do too.
Posted by Loisaba Wildlife Conservancy at 10:09 AM