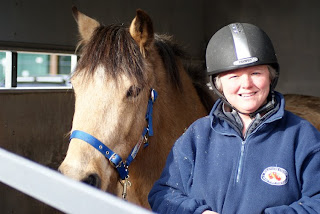 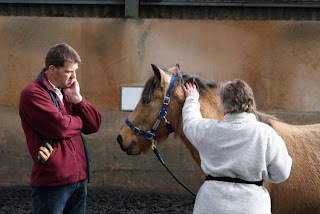 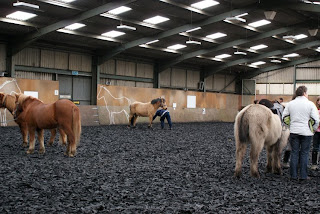 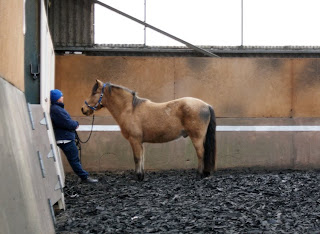 Jack and I have reached the point where my rather casual clicker training has needed a bit of tidying up. We have reached a bit of a plateau with some of the essentials such as foot handling so today it was off to a Ben Hart clinic at The Fortune Centre, near Burley. Out of the window my mouth "tlocking" and in with a proper clicker device so that I can mark the behaviour that I am after more accurately. I also realised that in seeking to extinguish the need for clicker for some behaviours I have been extending the number of clicks before the terminal bridge rather than introducing a truly variable schedule of reinforcement. Nevertheless, I got the impression that Ben thought I had done a good job so far and that Jack was a pretty confident pony given his history. He reminded me that I need to work with the pony that I have got now rather than the pony that he used to be. Considering that he had loaded, unloaded and travelled so calmly and also worked in a school with several other ponies and lots of people, I sort of knew that he had come a long way. His owner, Sue, was able to come for the morning to and I think she was pretty pleased with his progress.
Posted by Loisaba Wildlife Conservancy at 8:33 PM