5th February, 2010 From trail to trailer 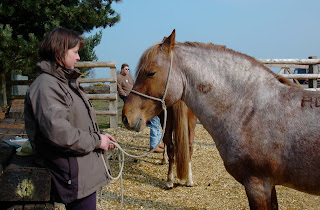 Jack's dad, Warren Play Away at the Stallion Passing a few years ago.

Jack is still going out for walks but this week I have been working on asking him to load. You may recall that he arrived in a stock trailer and came out like a bull. I remember thinking what the hell have I taken on? There is a possibility that we may get in at a clicker clinic in a couple of weeks so trailer loading has become a priority. I though we might end the first session with one foot on the ramp if I was lucky but ended that first session with him happily half way in, enjoying his clicks and treats. Day two and within 10 minutes he was stomping all the way in and backing off calmly. Today he has been stomping in loose, having his headcollar put on in the trailer, and then backing off calmly. Nevertheless, I can tell that he would have a complete panic if anyone tried to put the ramp up at the moment so I'm scouting about for a stock trailer than I can borrow for a day at the same time as consolidating what I am doing. I really feel that he is ready for the clinic itself and its only a matter of time for the loading.
Posted by Loisaba Wildlife Conservancy at 8:48 PM