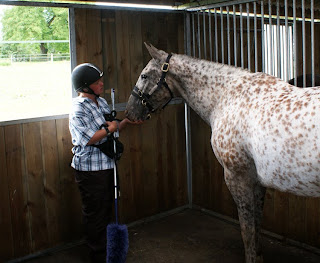 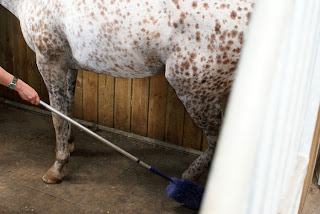 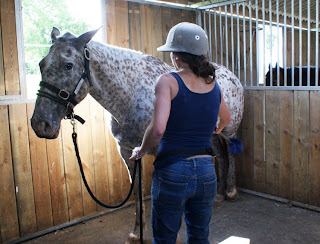 Onca is a smashing polo pony originally imported from Brazil. It appears that she was very badly treated there and her new owner suspects that she may have been hobbled. In any event, she is extremely wary of people and kicks out violently when her back legs are touched. Not only that, but she has a double reaction in that once she has kicked out, she expects to be hit so she reacts all over again by tucking her bottom right underneath herself and moving forwards or backwards. It is compulsory in polo competition for all four legs to be bandaged so not only is this behaviour dangerous, it is proving to be inconvenient. After her last match, she wouldn't allow anyone to take the bandages off and it was only yesterday that they managed to remove them.

Today we started work on what could be a long process of desensitising her legs. For safety I used the feather duster so that I didn't have to have my body close to her if she wanted to kick and so that the feather duster could stay in place if she did. I further enhanced the training with clicker and for the first time she started to really engage in the process rather than just waiting to see what happened. It was amusing to see her saying, come on, let's have another go but also very sad to imagine how she had come to be this worried in the first place. She has lovely owners and a nice groom who took over from me and proved to be very good. I really hope we can make a difference to the way she feels.