11th September, 2012 Persuading Roo not to behave like a Kanga

When a horse is worried about being in a stable - crib bites and weaves and only really happy with the top and bottom doors open and a padded chain across - and used to dash through the doorway and still does occasionally,then you know that at some stage she has been got at in a small space. When she is tentative about loading, can't stand still when she's in there and then leaps down the ramp, shoving people she is normally affectionate with out of the way, you suspect that she's been got at when loading. When I tell you that she is an ex-flat racer then you start to wonder how she was 'persuaded' to go into the starting stalls and to load into the horse box and whether she met with infinite patience or, more likely, a lunging whip or an electric prod. Even the horse walkers that are frequently used to exercise these athletes use an electric shock to ask the horses to keep moving if they stop.

This is what we are up against with the little ex-racehorse mare I went to see today. I worked with her sometime ago when she was even frightened of stepping over a pole (she's also hurdled) and fortunately she is much much better about that now and doesn't complete panic and refuse to try again if she accidentally touches one with her foot. In fact she is a lot calmer now - a combination of being in one home for over twelve months for the first time in her life, being looked after by kind and patient people who understand her behaviour and believe that she is fearful and not naughty. She has come so far with noises that we were able to create a safe place with the panels around her and she was clonking on and off the ramp - hardly with gay abandon but certainly more confidence that no-one was going to come up behind her and force her on or contain her before she was ready. Nevertheless, we left the session with her willing to stand on the ramp with all four feet and we didn't ask her for more. I used mild pressure and release with her, taking care to reward every step forward she took with a clear release of the line, a big deep breath out, a kind and quiet word, a clickered treat and a lovely rub before gently backing her off again. A ratio of six rewards/releases for every offer she made to try and a combination that takes some time to go through adding to the general air of non-urgency. I want to absolutely prove to this horse that we are prepared to be utterly fair to her and that we will work with her not against her.

Fortunately we were working in a yard where people are interested in helping, not putting in their own two penneth about how we should be doing it. We've got some way to go but this was a good start in its own way. 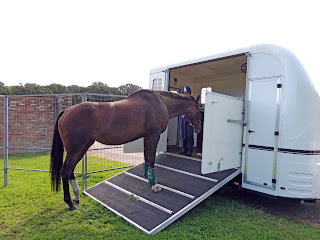 "Thank you very much for all your help with Roo today.  K and I are both so pleased to have your expertise, knowing that you care for our horse in the same way as us.  Too many people don't understand why we treat her the way we do, so it is marvellous to have you on our side. I am very pleased to say that Roo happily munched her dinner from the trailer ramp this afternoon.  I had a big snort when we diverted course from the field to the stable via the trailer, but when she saw the bucket of feed, she was only interested in that and forgot all her reservations about the trailer itself." AB