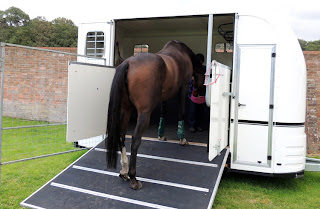 Yesterday I worked with Roo again. Since my last visit, her owner has been feeding her on the ramp where she seemed pretty relaxed, however, when asked to take just two more steps forward into the trailer, she was still really frightened and there was no way that it would have been safe to try to turn her into position as she would simply have burst back out again - after all, this is what she has been trained to do in the starting stalls where I imagine she was equally as terrified. Although I could have closed the panels up behind her to ask her to go in, the risk of her hurting herself if she had come out in a great rush was just to high. Any fool could have cajoled her to go on there with a big stick but that is at least half the reason why she is so afraid of going in - her back legs start dancing as soon as she starts to feel enclosed.

Rather than practising her 'no', or being put into a position where we would have to use more pressure or even force, the owner and I have agreed that we need to try a Plan B which will involve getting her used to walking over a rubberised board first and this may well be enclosed with panels just for safety. So watch this space as it may involve my horse agility board and table being moved onto their yard for 'loading' practise. in the meantime, Roo will be fed on the ramp and just these two steps forward of where she was before.
Posted by Loisaba Wildlife Conservancy at 3:36 PM